5 Ways The Oakland Athletics Can Get More Attention

The Athletics got a little less anonymous when they signed Yoenis Cespedes. Here are five other ways they can make a splash, including one free agent signing that could take place any day now.

Share All sharing options for: 5 Ways The Oakland Athletics Can Get More Attention

If teams were exactly true to the image they portray, every Oakland Athletics player would have red hair and come from a broken home. It's hard to feel sorry for their towel-throwing ownership group, but the A's have players and fans who would appreciate a little more in terms of respect, and attention. It isn't their fault tarps cover the upper deck and their General Manager keeps reshuffling the deck before the cards are even dealt.

Beane didn't just deal away pitchers entering their primes this off-season, though. He pulled off a little magic trick, signing a huge outfielder from Cuba, Yoenis Cespedes, to a 4-year, $36 million contract. Younger readers might not remember what it was like when Bo Jackson ran up outfield walls and hit a Rick Reuschel pitch about 475 feet in the All-Star Game, but those who knew Bo can't help but get excited about the prospect of watching a guy who draws comparisons to the former 2-sport star, back when the Kansas City Royals were allowed to have stars.

Boy, did the A's need an addition like Cespedes. Even if he plays terribly, at least we're curious. They have a hard enough time drawing fans -- even when they win -- and their 2012 attendance numbers figured to be embarrassingly bad before Cespedes signed. Now, there might be a moderate initial boost, and more if Cespedes turns out to be a star a la Jeremy Lin (sorry, it's in the blogging contract that Lin gets at least one mention per post, regardless of the subject matter) ... but in all probability the A's, even with Cespedes, will play a good portion of their games in front of crowds under 15,000.

The A's need to embrace the risk-taking mood that led to adding Cespedes to drive excitement, get some much-needed attention and perhaps even win a few more games in the process. Why? Because a Major League team that's boring and anonymous, especially in our backyard, would be a travesty.

Here are five ways the A's can spice things up, starting with a familiar rumor.

Sure, he still has a 50-game suspension to sit through. Yes, he's going to turn 40 while serving said suspension. However, Ramirez seems desperate to play again and, while he's a known PED user, drugs aren't the reason why hitting has always seemed effortless to Ramirez. He doesn't just bring a Hall-of-Fame caliber bat to Oakland, either (it really looks like he's going to sign with the Athletics, by the way). Ramirez brings the whole package: the hair, the baggiest uniform this side of Livan Hernandez, and -- say it with me now -- MANNY BEING MANNY.

Once the A's sign Manny, why not bring back his old outfield mates -- J.D. Drew and Johnny Damon! Sure, Drew is 36 and only had 11 extra base hits in 81 games last year. And unless the AL adds another designated hitter spot, Damon and Manny can't play at the same time. But Drew and Damon are still without a team, and what better way to confuse the Red Sox fans who pack the Coliseum whenever Boston comes to town than start a retro-outfield of Manny, Damon and Drew? Maybe the A's can lure Tim Wakefield out of retirement, too.

Maybe this would only garner local attention, but the A's would infinitely improve their concessions situation if they added a couple In-N-Out Burger restaurants. A legit local brewery (Speakeasy, Bear Republic or Lagunitas come to mind, but there are plenty of others) would also make the Coliseum a more tempting place to hang out and gain weight. Granted, this suggestion (along with the rest of them, to be honest) isn't necessarily serious. However, after reigning supreme in terms of culinary offerings when the San Francisco Giants played at Candlestick, the Coliseum's food options now seem like they're getting worse and less varied by the season.

4. Give Brandon McCarthy (and his wife) a reality show

Maybe I have a strange obsession with sports reality shows that'll never happen (like the one I pitched revolving around the Sacramento Kings a couple months ago), but this one would be incredibly entertaining and introduce the Bay Area to a couple that people on Twitter have known about for quite some time. Brian Wilson had a reality show for a while called "Life of Brian," before the beard showed up and before Wilson's act became well known. A show about the McCarthys would be better than "Life of Brian," trust me. Just don't invite the Cansecos, or Brandon will quickly lose interest: 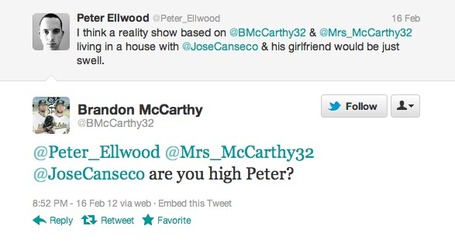 5. Speaking of a certain Bash Brother...

We know why the A's won't sign Jose Canseco.

But in an era where Beane says he has a hard time convincing stars to come to Oakland, this Surreal Life alum is publicly begging Beane for a tryout. Tell me you wouldn't buy a ticket if you heard Canseco was in the lineup that night ... preferably in the outfield. What do the A's care about bothering MLB anyway? Tell Bud Selig that until the stadium situation gets figured out, Canseco's going to be swinging for the fences every night.