Due to recent season struggles, the Oakland Athletics have remained off the national radar. Since reaching the 2006 ALCS, the A's have been overlooked outside of Dallas Braden's 2010 perfect game. The world premiere of Moneyball, starring Brad Pitt and Jonah Hill, has put the A's back on the national radar. With big names like Pitt and Hill in the movie, the A's have reached the point of even getting on the cover of Sports Illustrated. 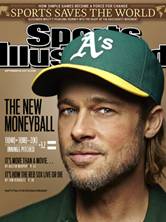 Pitt spoke with SI senior writer Austin Murphy about his baseball knowledge (or lack thereof) and how he prepared for the role of Billy Beane. Moneyball is more about the revolutionary ideas Beane used to help his Oakland A's remain competitive with the rest of the league, but stats can only do so much in a nationally released movie.

Screen-writers Aaron Sorkin, Steven Zaillian, and Stan Chervin were able to take a well-written book by Michael Lewis and further flush out the characters. Lewis quietly put together interesting character depictions of the principals and the screenwriters were able to successfully build on that. The movie thus was able to take the basic premise of Moneyball and develop the character depictions, resulting in a fantastic movie.

The Brad Pitt SI cover is the September 26 issue hitting news stands Wednesday. Here are some of Pitt's comments from the article:

'Moneyball' Goes 0-for-6 At The Oscars