The Oakland Athletics 2011 Spring Training welcome its one true rock star, Hideki Matsui. The newly acquired designated hitter is well known in America but is considered a rock star in Japan. Today was the official report day for Oakland A’s position players with the team’s first full squad workout scheduled for tomorrow. The Oakland A’s may have discovered the most appropriate welcome for the man they call Godzilla: 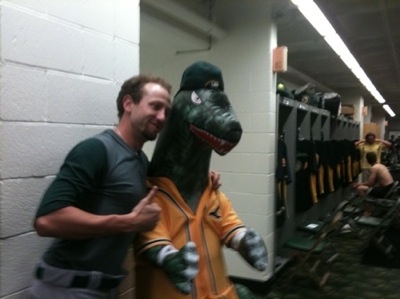 The A’s had a six foot tall inflatable Godzilla dressed up in A’s gear sitting at Matsui’s locker upon his arrival. He reportedly took it in stride and was amused. His arrival was marked by a huge media contingent that will be following him all season long. The A’s experienced a modest boost in coverage when they brought over Japanese pitcher Keiichi Yabu, but it was nothing compared to what they’ll get with Hideki Matsui on the team. It won’t quite be the Bronx Zoo feel from when Matsui was in New York, but it should still make for an entertaining circus.

Matsui conducted an initial press conference today and Susan Slusser had all the coverage via Twitter. The highlight was him discussing his dad’s prediction of a .300 batting average and 30 homeruns in 2011. If the A’s can get those numbers from Matsui, their offense will likely take a strong step forward.