Hisashi Iwakuma And His Shuuto Well-Suited For Athletics Infield

Share All sharing options for: Hisashi Iwakuma And His Shuuto Well-Suited For Athletics Infield

According to a preliminary breakdown by danmerqury of Athletics Nation, Iwakuma should do very well as an Athletic. Click on the link to read further analysis.

Iwakuma, thankfully, is a groundball pitcher with good control that should thrive in front of Oakland's fantastic infield defense. Detailed stats can be difficult to find for his time in Japan, but he threw twenty innings in 2009's World Baseball Classic. And aside from his first WBC start (which was in the Tokyo Dome), his other three WBC appearances were in San Diego and Los Angeles, where he was recorded by the PitchFX cameras.

First things first—scouting reports indicate that Iwakuma throws a four-seam fastball, a shuuto, a splitter, a slider, and a curveball. His fastball is usually thrown in the low 90s although he can dial it up to 93, whereas his shuuto and splitter sit in the high 80s. (The shuuto is a Japanese pitch that is most closely related to a two-seam fastball or a sinker.)

Here's an image diagramming his pitching movements, courtesy of PitchFX. 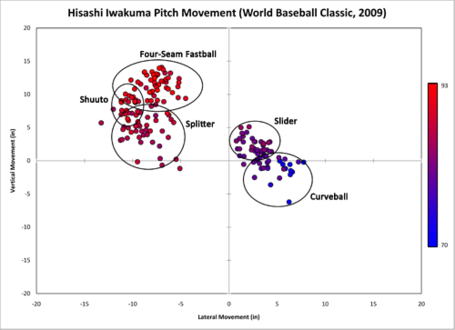 So what exactly is the shuuto?

The pitch is mainly designed to break down and in on right-handed batters, so as to prevent them from making solid contact with the ball. It can also be thrown to left-handers to keep them off balance. Good shuuto pitchers often break the bats of right-handed hitters because they usually get jammed when trying to swing at this pitch. It could be said that the shuuto has a somewhat similar break and purpose as the screwball for a left-handed pitcher, even though the latter is also meant to be primarily thrown at right-handed batters. If the shuuto pitch was thrown off the outside part of the plate, it would tail back over the outside border of the strike zone. Conversely, if it was thrown on the inside part of the plate, it would move even further inside.

The shuuto is often described in English as a "reverse slider", but this is not strictly the case, as the shuuto generally has more velocity and less break than a slider. The two-seam fastball, the sinker, or the screwball in differing degrees, will move down and in towards a right-handed batter when thrown, or in the opposite manner of a curveball and a slider.