Too Short Pops Up At Warriors Game, Beats Clippers Single-Handedly

Share All sharing options for: Too Short Pops Up At Warriors Game, Beats Clippers Single-Handedly

Although Oakland rapper Too $hort may not hold too solid a spot in the collective consciousness in the rest of the country, he is a fixture and legend among residents of the Bay Area. Although Monday night's Golden State Warriors victory may have gotten a lot of buzz regarding an unexpected appearance by Dave Chappelle, there were plenty of people in the crowd who were just as excited to watch a short performance by Too $hort.

Our very own Bay Area Sports Guy was at the Warriors game on Monday and relayed the info that Too $hort popped up for a cameo performance.

Here's a picture of $hort with the Warriors girls from last night. 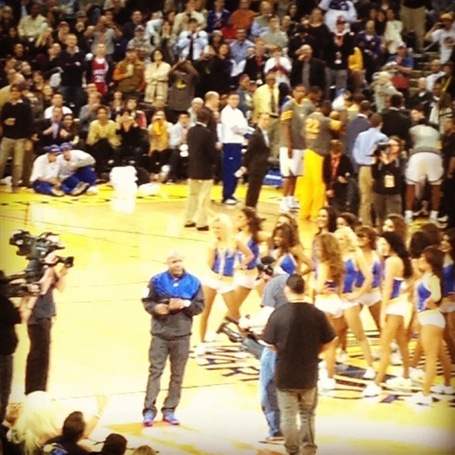 It's far from the first time that the rapper has shown up to give his support to the hometown team. In fact, he was at a game against the Lakers just last year, in a performance that was almost certainly very similar, based on the staging.

I love that video, because you can hear the huge roar of the crowd when they figure out that Too $hort is in the house, but you can't actually see anyone reacting from the camera angle.

Perhaps it was the added boost of energy and support from Too $hort that resulted in the upset win over the Clippers on Monday. We may never know.