Here's a look inside Warriors practice on Monday at their headquarters in downtown Oakland.

I was afforded the opportunity to attend Golden State Warriors practice on Monday in preparation for their upcoming game with the Miami Heat on Tuesday. Here's a look at how it went, including photos and video from yours truly.

I arrived at Warriors headquarters in downtown Oakland a little bit anxious for what was in store, seeing that I've never been to an NBA practice, nor have I ever spoken to an NBA player before. I had a couple of questions rattling around in my head for them, especially coach Jackson, but when I got up to the W's offices I figured I'd just keep them to myself seeing that the hallway outside the practice area was pretty packed, and the big guns in attendance were likely already loaded with questions already.

After about a 10 minute wait, we were allowed into the gym for the last part of practice, basically the players shooting around while the PR guys herded the media folks in, let the cameras and such get set up and so on.

Monta Ellis was up first, taking a seat while the media folks nudged as close as possible in a circle around him with their voice recorders and cell phones. Seeing that this was my first time, the last thing I wanted to do is step on anyones toes (proverbially or actually) so I stood on the outside of the circle, but close enough to get some photos and a video of Monta.

Monta spoke rather quietly so the video was bunk. Fortunately, I also took this on my phone: 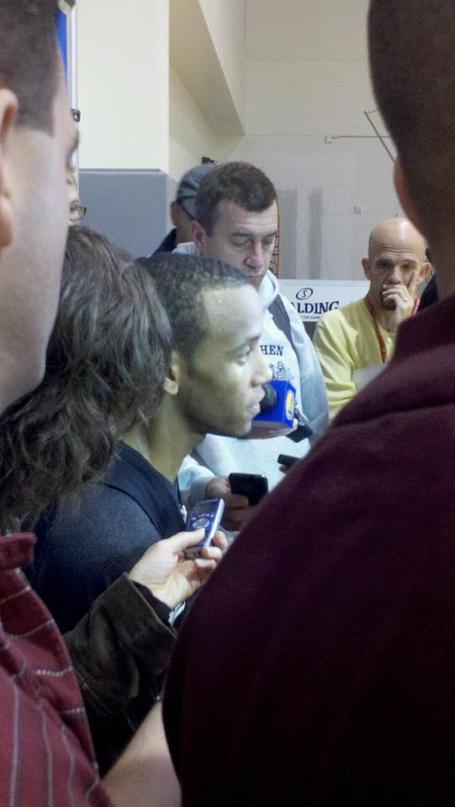 CSN Bay Area's Matt Steinmetz asked both Monta and Coach Jackson (had video of Jackson but once again sound was rough) whether or not it was time for Monta to be "more vocal" and possibly "call out" some of his players. Here's what Monta had to say about it:

With us, we watch film, we bring points out on film. It's not me to criticize my teammates. They get away with it, they do what they do, that's LeBron and that's Kobe. That's how they deal with their team and their situation.

We deal with our team different over here. We're going to continue to do what we do. The guys that messed up or need to step up they know what they need to do and we go at it that way. I'll never bash my teammates in the paper, go at them sideways like that. I'm going to lift them up more than anything.

Steinmetz asked Jackson whether or not Monta ever tries to "light a fire" under his teammates or if it comes natural for him to do so: 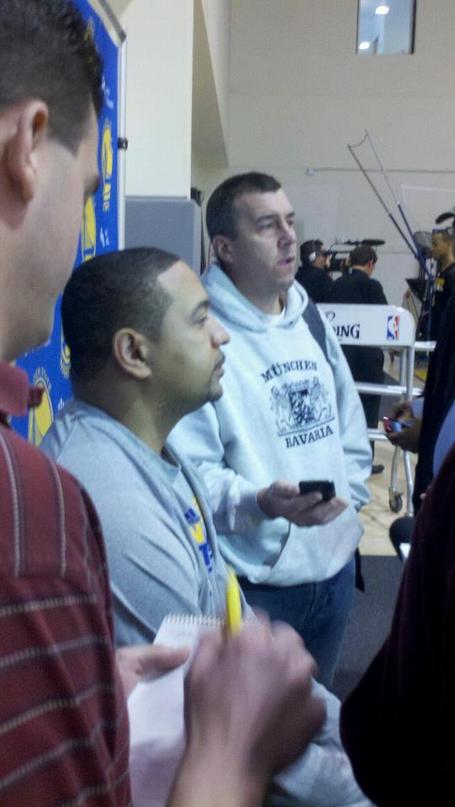 Last but not least was Kwame Brown, who I actually got some decent video footage of, only I took it right side up because of the crowding so it was published with him looking skyward. I'll do better next time I promise.

Kwame fielded some questions about their matchup with the Heat:

Here are some other pictures I took while I was there:

Best picture of the day, Klay shooting a three right in front of me. Also notice the old-school jersey's in the background. Very hard. 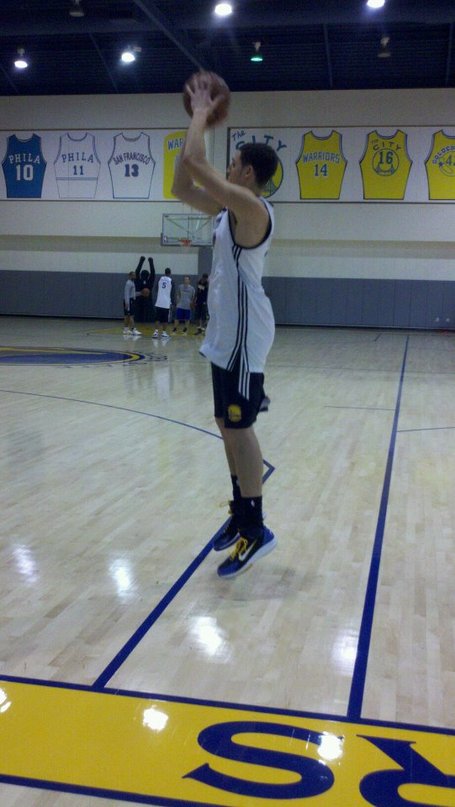 There goes Nate Robinson, he was busy running sprints after this jumper: 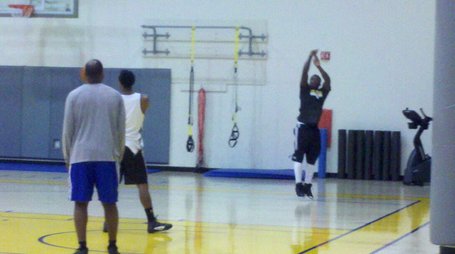 David Lee thinking it out (he was way on the other side of the gym, had to zoom a lot): 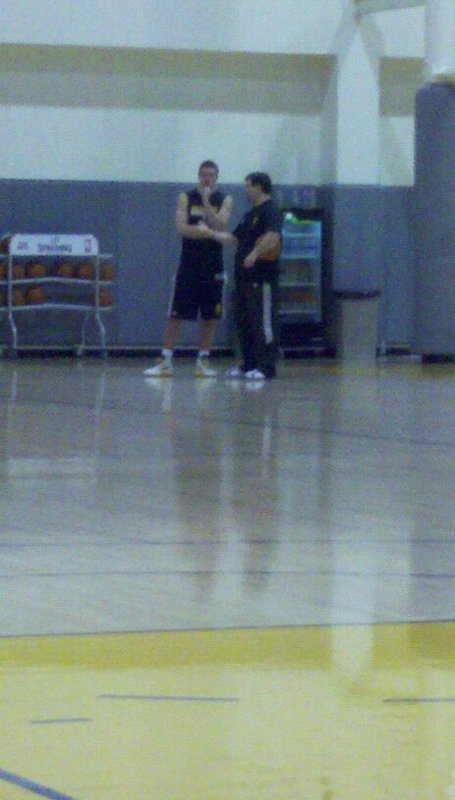 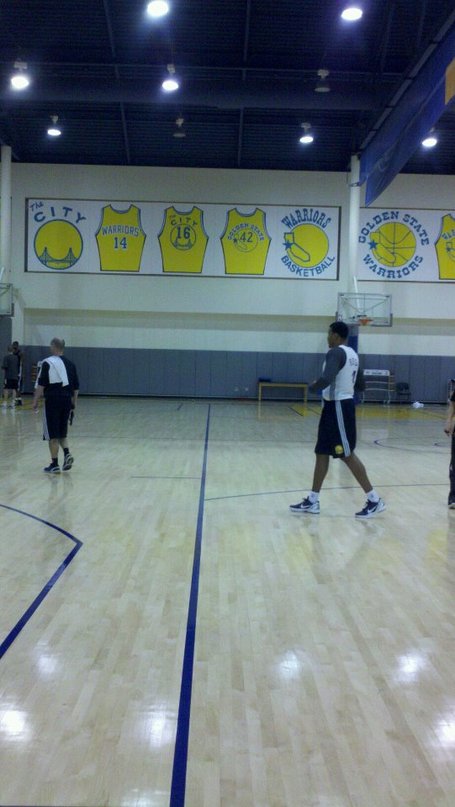 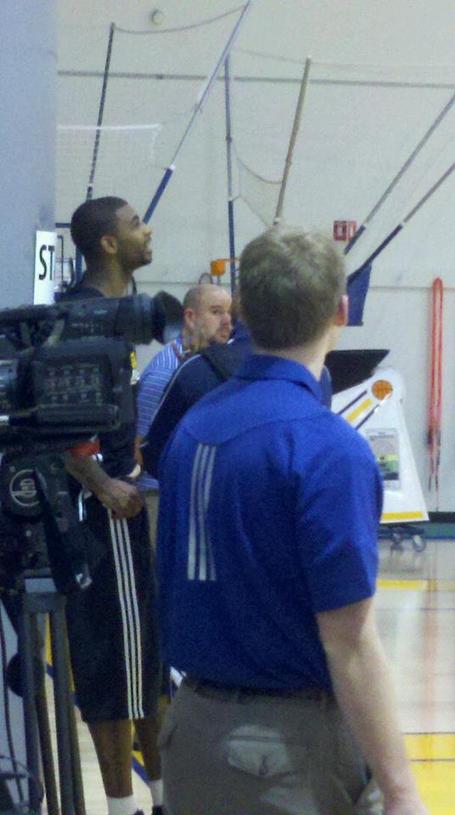 Big thanks to the Warriors PR department for giving me the hook up!

For more on the Warriors, head over to Golden State of Mind.