If the NBA lockout ends, the Warriors and their new head coach are going to be at a huge disadvantage.

As the NFL lockout drew to a close, analysts almost uniformly pointed toward the 49ers and slowly shook their heads in a pitying manner. "Those poor bastards. A new coach. So little time to prepare. They don't have a chance." And so far, that looks to be somewhat correct. The Niners, especially when it comes to their offensive line and secondary -- the two units that many say take the longest to gel -- are behind the curve and could have used much more time before the regular season than they were afforded.

The Golden State Warriors are in a similar holding pattern. While their team stands to look pretty similar in terms of personnel to the 2010-11 squad, the Warriors have another new head coach, and Mark Jackson is by all means new since he has no head coaching experience at any level (although he sure can work a crowd into a frenzy with his preaching, kind of like the Niners' inexperienced head coach who preceded Jim Harbaugh). But if the 2011-12 NBA season is scrapped, the Warriors will have plenty of time to focus on defense, get the rookies involved and everything else for 2012-13, right? According to Ric Bucher, that's not exactly a sure thing. 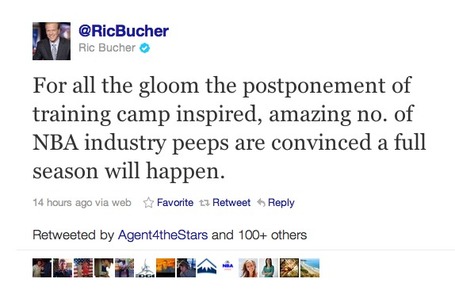 Who knows, maybe there will be a season after all. Considering the rising popularity of the league last season -- at least in terms of TV ratings -- and the fact that there are still people out there who'll gladly pay hundreds of dollars for NBA tickets, it's hard to imagine an entire season's worth of revenue getting tossed aside. If I had to bet money (and thank God I don't), I'd wager on a similar situation to what happened with the NFL lockout occurring, with an agreement coming in the next couple months. A shortened NBA season is distinct possibilty, and a truncated or nonexistent training camp is almost guaranteed.

This would be a disaster for the Warriors. If the players and the team's new coaching staff are in the same room together for the first time only a week or two before games start, how can they even be expected to win as many games as the underwhelming 36 victories they posted last season?

Maybe that's why they drafted Klay Thompson, who isn't quite as gifted athletically (or defensively) as some of the guys in that section of the draft. However, Thompson might have been the most pro-ready guy in the top half of the first round other than maybe Kemba Walker. Jeremy Tyler is probably going to have to get used to the idea of playing in North Dakota, though.

Rookies aside, there are several other questions:

-- How will the Warriors emphasize defense more than they have in the past (which shouldn't be hard) with Monta Ellis and Stephen Curry manning both backcourt spots (which on the defensive side has always been difficult)?

-- With a hard salary cap a possibility, or at the very least a lower, firmer cap, will the Warriors be able to afford any free agents of consequence?

-- Andris Biedrins hasn't exactly been known as the hardest worker during the off-season. With many people figuring the upcoming season would be canceled, how long has it been since he's picked up a basketball?

-- With all this talk about an emphasis on defense, what kind of offense will Jackson install? One thing the Warriors' accelerated pace has masked over the last few years is that they're a very mediocre team when it comes to scoring in the halfcourt.

Along with all the coaches, the Warriors have made several changes to their front office. Along with the ownership and uniform changes from last season, the relative lack of turnover on the player personnel side is rather striking (note: I didn't say lack of turnovers from the players -- the Warriors will still have plenty of those). But like Harbaugh, Jackson is going to be expected to change the culture and the results in an absurdly small amount of time if an agreement is reached between the owners and players. Jackson would have to be a true miracle worker to accomplish that in 2011-12.