The NFL, NBA and MLB have called the East Bay home for decades, but how long will that last?

The new Golden State Warriors uniform is a huge change from how their previous synthetic threads used to look. No more navy blue, orange or lightening bolts. Their new duds give a nod to the past, with a circular, bridge-centric logo. They're attractive enough to make one believe they'll be wearing them for the long haul ... but they won't. Joe Lacob and Peter Guber paid more than market value for the Warriors. When Mark Jackson was announced as their new head coach, reporters gathered in a swanky hotel in San Francisco. Considering that, the opportunity to move the team to "The City" doesn't just exist in speculative newspaper reports -- it's a likelihood for which we should all be ready.

The mass exodus from the East Bay hasn't started yet, but it's coming. Considering the teams currently in Oakland, their stadium/arena situations, and where the money is and/or is perceived to be, it might not be very long until zero professional sports franchises reside east of the Bay, San Mateo and Dumbarton Bridges.

This isn't just a sports thing. Several regional newspapers run by the Bay Area News Group, many of which dotting the East Bay, will soon become footnotes in local media history. Consolidated, as they say in boardrooms. No more Oakland Tribune, Contra Costa Times, The Valley Times, San Ramon Valley Times, Tri-Valley Herald, San Joaquin Herald, East County Times, Alameda Times-Star, The Daily Review, The Argus or West County Times. Those 11 newspapers will become two, but in reality they'll just be slightly regionalized versions of the San Jose Mercury News. Plenty of thriving communities exist in the counties of Alameda and Contra Costa. To say there isn't money in Berkeley or along the HWY 24 and 680 corridors would be extremely inaccurate. However, San Francisco and San Jose are the areas where media corporations and millionaire/billionaire team owners want to call home.

San Jose's the place where the Oakland Athletics want to be, and they'd probably already be building a new home in the Silicon Valley if the San Francisco Giants didn't hold territorial rights to that region. The only other options for the A's to escape the dilapidated Coliseum -- besides storming San Jose with pitchforks and torches -- are to either build a stadium in downtown Oakland, in some freeway-connecting town like Fremont (where a stadium measure already went up in smoke back in 2009), or to move out of the Bay Area entirely. While many feel a new stadium in Jack London Square would revitalize a city that could use a little revitalizing, the Athletics' first choice is clearly Silicon Valley. And with publicly-financed stadiums in California likely a dead concept, it's tough to imagine the Athletics dipping into their pockets anytime soon to stay in "The Town."

Then you have the Raiders, who moved back to their old house, ruined it with that monstrosity known as "Mt. Davis," and haven't been able to sell out their home games for years. Al Davis has moved twice in the past 30 years. With Los Angeles looking to build a new stadium in the "L.A. Live" complex, the San Diego Chargers are rumored to be the team most likely to move in when/if it's built, but you can be sure Davis is watching that situation closely. Oakland/Alameda isn't going to build him a new playground, and after several years of blackouts it's difficult to imagine Davis looks upon his return to Oakland as a wise business decision. And if the Raiders and the 49ers can get past last Saturday's exercise in preseason low-lifery and work together to break ground on a new, shared stadium, it's almost certainly going to be located in Santa Clara.

Only the ones with ties to the East Bay, people loyal because they grew up in Oakland, Alameda or Berkeley, or those in Contra Costa County who consider San Francisco and San Jose too far to drive on a regular basis. But most A's fans I've talked to aren't upset that the A's want to leave Oakland, but instead that their favorite team can't move to San Jose because the Giants won't budge and MLB won't do anything about it one way or another. And while there are those who wish the Bay Area's NBA representative were called the Oakland Warriors, many also share the opinion of Warriorsworld: 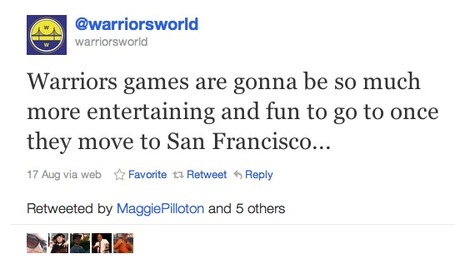 The movement of our local pro sports teams looks to be in concert with where the money's going. To the West (San Francisco), and the South (Bay). It might sound harsh to East Bay residents who've grown up with equal representation in the pro sports landscape, but recent history suggests East Bay sports roots are short -- and not just because Davis has always been looking for a better deal.

The A's moved to Oakland in 1968 from Kansas City, where they played for 13 years after moving away from Philadelphia. Philadelphia is where the Warriors played for their first 17 years before moving to San Francisco in 1962, where in the Cow Palace they sported the same "The City" jerseys that so heavily influenced the uniforms the Warriors debuted last year. The same jerseys they might sport modernized versions of when they play in a brand new arena located in the AT&T Park parking lot.