If I learned anything from 90s westcoast rap videos, it's that Los Angeles summer time is filled with barbecues, parties in the park, and 70s soul and funked inflected tunes. Los Angeles native now Warriors starting small forward Dorell Wright seemed to live up to this Los Angeles standard of summer chillin' the other day.

A youtube video created by Coz Studio (a company's whose information is impossible to find off the internet) shows Wright hosting a large picnic party in Carson, California for the youth participants of his foundation, "D-Wright Way." From the looks of it, a bulk of the video centers on Wright and his friends' interview with a WarriorsWorld.net correspondent. But, from the video, there is something suspicious about Wright's relationship to the Warriors.

By suspicious, I'm talking about the posters of Wright set up at the picnic. The posters are SLAM Magazine-worthy inserts of him as a Miami Heat. If his foundation was created during his time with the Golden State Warriors (and funded by them, says his website), wouldn't you think he would have photos of him IN Warrior gear? I'm a little suspicious. 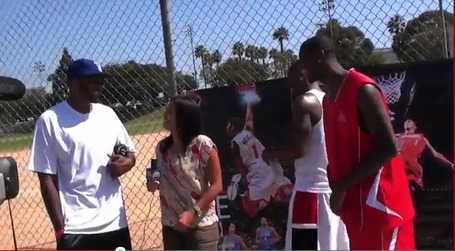 To his credit, it looks like the shirts he gave out to participants at the picnic ARE Warriors blue and gold. So maybe these photos were just the best of his personal collection of photos of himself. All in all, looked like a great event. For the full video: