If there was anyone that ever doubted Monta Ellis' leadership skills, yesterday's win may have quieted all the haters (me included). There's multiple interpretations of Monta's demeanor on court: He's a stone-cold assassin like his biggest fan, Kobe Bryant or he just doesn't like his teammates. Whether he was just misunderstood by the media as being selfish or not, Monta seems more than willing to be a leader through his play on the offensive and defensive end.

But more surprisingly is Monta's change in body language over the course of this season. Besides having an amazing new mid-range jumper, Monta has added a new move to his arsenal: high-fiving his teammates.

High-fiving each other is a big deal for a team that was once criticized by Vladimir Radmanovic and others as a team that possibly hated each other. We've heard about the team dinners and their sing-a-longs in the showers and in the car, but Monta Ellis' high-fives are showing a new dimension to this team. Here are some screen grabs from last night's broadcast of the Warriors versus New Orleans Hornets game that shows a new side of Monta and the rest of the Warriors: 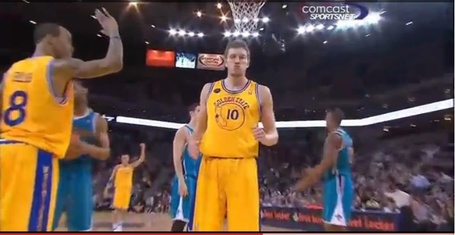 After David Lee slammed home an and-1 from Steph Curry, Monta was there immediately with a high-five. Even as Lee cheered, Ellis waited with his high-five hanging. Luckily Lee didn't leave him hanging. 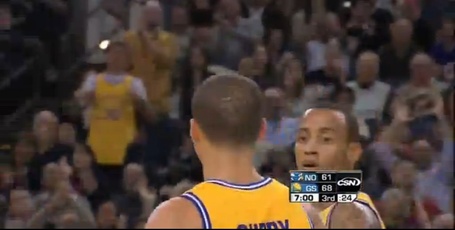 Here's Monta again greeting his teammates after a nice place. You can't really see from this angle, but Monta came up to Steph after Steph his another 3-pointer with what looks to be some congratulatory high-fives. Drama in the backcourt, still? 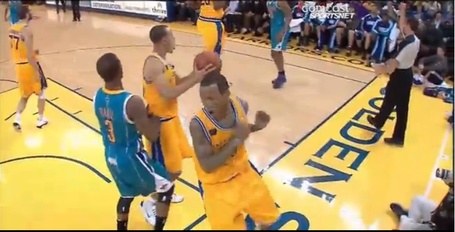 This might be the funniest of Monta's new leadership as he reacts in disdain to the official's call. This is huge for two reasons. First off, Monta's not one to ever really show emotion, so seeing him upset is pretty surprising. Secondly, Monta was frustrated by the call given the amazing defensive play by rookie Ekpe Udoh on David West, which the young official thought was a hack on the wrists. Again, Monta is not known for really acknowledging teammates on the floor in the past, so him showing this kind of emotion shows he's got his teammates back! 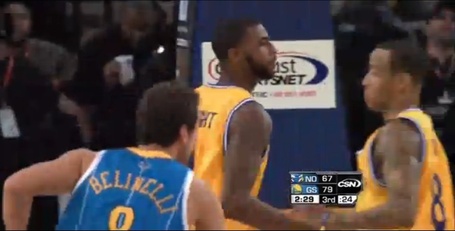 Here's Monta caught again by the paparazzis distributing high-fives! Dorell just hit a three from the corner and here's Monta again, waiting to give his swingman some props. Sorry Marco Belinelli, you can't join in on the action that you were never privy to while you were in Golden State. 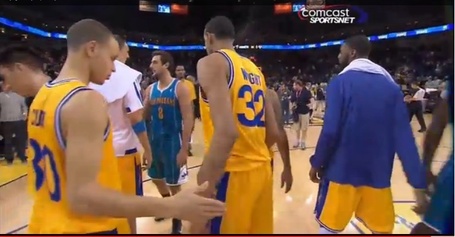 Lastly, don't get caught like Stephen Curry high-five-less. In the post-game high-five session, the camera showed Brandan Wright, who played a few minutes of garbage time, high-fiving teammates and opponents pretty quickly. Curry came to congratulate him when B.Wright tapped him quickly and walked off. Maybe B.Wright was sensitive that he wasn't invited to the "Dirty Bit" sing-a-long?

(screen grabs via golden state of mind via gumbyorpokey)