Golden State Warriors head coach Mark Jackson is looking to get his W's started like Jim Harbaugh and his San Francisco 49ers did in his first year as head coach. Jackson took some time to visit 49ers headquarters in Santa Clara on Wednesday to meet with Harbaugh and gain inspiration from his work with the 49ers.

Jackson met with Harbaugh at length before Wednesday's practice, and plans to meet with him some more afterward. There are many similarities between their situations, such as first year coaches with a team in 'transition', and having to deal with a labor dispute. Coach Jackson was still unable to talk about the Warriors since the lockout hasn't fully been resolved, but he did talk abou how Harbaugh's turnaround with almost the same team as last year is inspiring to him as a coach:

As for Harbaugh himself, Jackson was not shorter on praise either as

"He's done an incredible job, passionate, great coach," Jackson said. "It's a great opportunity for us to come talk to him. It's great with what he's done here. It's no secret how he didn't just talking about changing the culture, but the culture has been changed."

Jackson mentioned that he would like to return the favor to Coach Harbuagh during the NBA season, and will meet with Oakland Raiders coach Hue Jackson at their team's facility this week as well.

Here's a picture of the two men sent from Mark Jackson's Twitter: 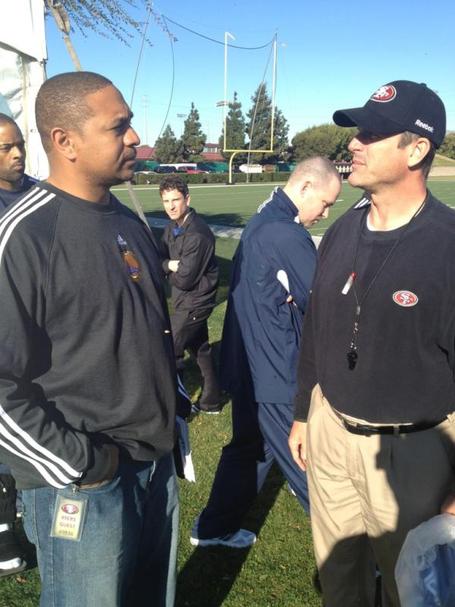