In the second quarter of last night's game, Vladimir Radmanovic might have had one of the more inadvertently hilarious plays of the night, which clearly surprised the crowd and his Warrior teammates a bit.

It was not an errant pass into the first row. It was not a three-pointer hitting the side of the backboard. It wasn't a bail-out foul at the three-point line with 1 second left on the shot-clock.

It was a thunderous jam, a deliberate move of dominance over some scrubs, that clearly showed his months of frustration with his own play and maybe from all the disses from fans. But how shocking was this play? Click on to see how fans and his teammates reacted

Fans (myself included) have wondered what happened to Radmanovic's game in the past few years, especially his decision-making as of late. This game was quite different where from start to finish Radmanovic looked more like Dirk Nowitzki-lite as he was billed to be coming out of the draft, tossing up nuttin'-but-net rainbow three-pointers and making posters out of recent d-leaguers in the Cavs' bigs. But catch the fan and teammate reaction to this move, which clearly was NOT what we ever expected from Radmanovic...at all. 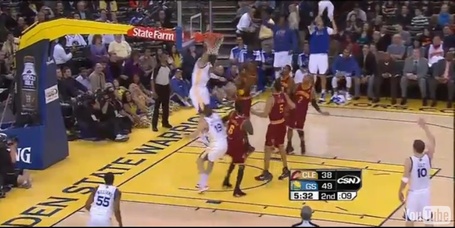 After receiving a pass from Stephen Curry from the wing and pump-faking some no-name Cavs big into the air, Radmanovic went baseline HARD with a thunderous slam which you see here (pardon the blurry-ness). But check what happens next: 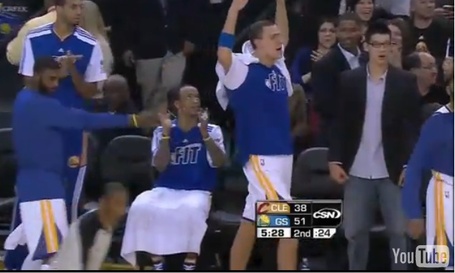 Andris Biedrins literally jumped out of his seat throwing his hands in the air, which you see here. Dorell Wright looks like he's trying to gun someone down with his fingers. And there is Jeremy Lin, in a different kind of uniform (street clothes), but with some sexy glasses on. Hey ladies, are these glasses hot or not? Clearly his teammates are enthused if not wildly surprised. Jeremy Lin's gaping mouth clearly shows how stunned he is. 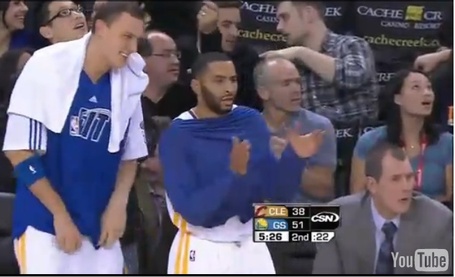 Recently guaranteed contracted PG Acie Law is ALSO very excited, so excited he nearly popped out of his warm up jacket. Biedrins is still reeling. And ladies, here's another shot of Lin and his glasses. And yes, that really is Lin, not the Chinese season ticket holder that sits right behind the bench (who also happens to be a family friend of mine from way-back-when). Also, check the Asian woman's equally gaping mouth to the right of Law. She is also in disbelief. 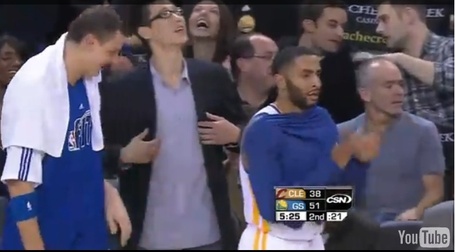 Another shot of Lin's glasses. Verdict? HOT. But check the woman laughing to the right of Lin's face. I get the feeling that the dunk by Radmanovic was clearly unexpected -- as his teammates rousing clapping and cheering is also indicative of.

Radmanovic finished the game with 13 points, 5 boards, and 2 greatly timed blocks in just 21 minutes. But what do these clips tell us? The Warriors, for one night at least, were a "GREAT TIME OUT!"