A friend of mine once told me that he ran into Andris Biedrins and Mickael Pietrus a few times at San Francisco night clubs. What startled me the most was not that they go out, but that they were there either alone or with a non-celebrity friend. Well, Dorell Wright has just about changed the profile of Warriors party culture. Photos courtesy of Young Black and Fabulous (YBN) show us that Dorell Wright's still close friend Dwyane Wade made an appearance with girlfriend and Contra Costa County native Gabriel Union at Wright's 25th birthday

Holy Shnikes! My 25th birthday was spent in snowy Michigan with two friends at a Thai restaurant. But Wright's "Phantom of the Opera" themed-party clearly outdid me by the bazillions. Stephen Curry and his girlfriend Ayesha Alexander were in attendance and for some reason Curry looks like some patron's son tagging along than a bonafide local celebrity. 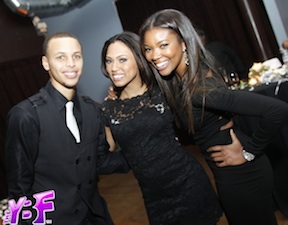