Jeremy Lin, recently re-assigned to the Reno BigHorns, is making the most out of his return to the D-League, putting up a stat-line similar to his days at Harvard. From the highlights, looks like he might be taking a cue out of Monta Ellis' big bag of tricks. You can witness his domination here and hear what he has to say about it.

As the recapper says in the intro to this day 3 of the D-League showcase (apparently many NBA scouts in attendance), this game is "saturated with NBA talent." I would go so far as to say, he's kind of right. The BigHorns feature many former solid to great college players, like Lin and his teammate Salim Stoudemire who have played meaningful minutes at some point or another in the NBA. Lin, however, showed off his skills with an array of impressive drives that Monta would approve of.  Lin's on the right track for now, lets just hope he doesn't end up like this guy... 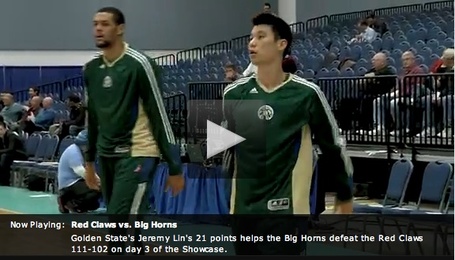 Lin clearly has way more heart, drive, and accolades to be infinitely more successful than this former lottery pick by the Golden State Warriors, Patrick O'Bryant, who I last heard was contemplating a move to play in China. Turns out, he was recently released for seemingly "not wanting to be there."  According to the NBA Fanhouse report (via Niubball), coaches grew increasingly frustrated by O'Bryant's unwillingness to "play under the basket against more physical opponents in both intrasquad and pre-season contests, preferring instead to stand out on the perimeter as a catch-and-shoot player."

Keep up the good work Lin and let silver-spooned former lottery pick O'Bryant be your motivation to kill it in the d-league.