Anytime the Lakeshow rolls into town, you can bet it will be a competitive game (most of the time). Despite the consistent Laker domination of the Warriors, there is always an epic battle between the stars (I use that term loosely when referring to the Warriors, clearly). Remember back in the 2000-2001 season when a young still-fro'd Kobe Bryant battled Antawn Jamison at the lightning bolt adorned Oracle and more amazing was that they both tallied 51 points EACH. Last night was so amazingly similar.

The Lakers may have won the battle with a 115-110 victory and Kobe had just one more point (39 points vs. Monta's 38 points), but there was a different battle going on between them...perhaps one that was of real consequence than an actual win or loss in the standings columns. It was the battle of snarly-faces.

Towards the end of a tight game where the Warriors' lead had dwindled to a 1-3 point deficit that they were constantly trying to catch up to, the intensity of both players were definitely much higher than ever. In the words of Emeril Lagasse, they "kicked it up a notch!" And it was clearly expressed through their facial expression and body language. If they had a staring contest of snarly-faces, who would break first? I'll let you be the judge: 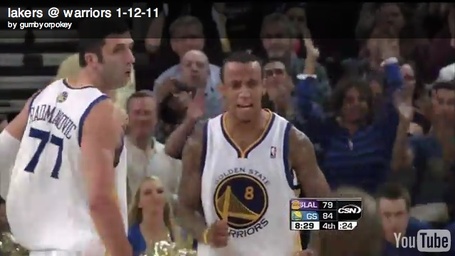 CONTESTANT NUMBER 1: This might be the most excitement or emotion that ANYONE has seen from Monta on the court. After an aggressive dunk down the lane by Vladimir Radmanovic, Monta was fired up, slapping Radman's hands and giving this look of approval and of intensity. 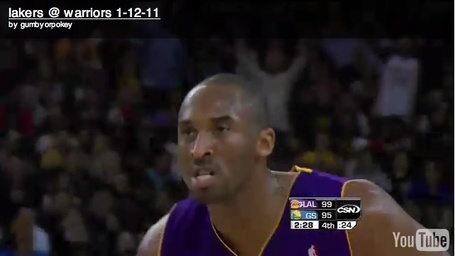 CONTESTANT NUMBER 2: After hitting a 3-pointer with Monta in his face, here's how Kobe responded, facially. He stared deep into Monta's soul trying to shatter him. With his mouth partially gaping open and, literally, snarling lowly as if about to go into beastmode (a werewolf maybe?). Perhaps Kobe's been watching too much of the "Twilight" series and is clearly Team Jacob.

So, who has the better snarly-faces? 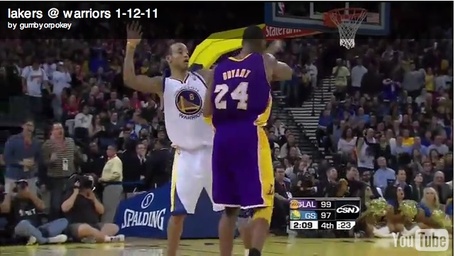