Is Your NBA Team "Watchable"?

Share All sharing options for: Is Your NBA Team "Watchable"?

There are NBA teams I absolutely detest watching, no matter how awesome their winning percentage is. Sometimes it's a mix of young talent that is still raw, sometimes it is the hot jerseys, and sometimes there's just nothing else to watch on television. But is there such a science to calculating the "watchability" of a team? Apparently there is, so see where your favorite team stacks up!

Andrew Sharp of SBNation breaks down the potholes but intellectual possibilities of FanHouse's TIm Ziller and Kevin Pelton's "Watchability Index" for the 2010-2011 season when it comes to hoops. There is supposedly science or equation to this, which Sharp describes as:

...calculat(ing) each team's "quality", and then crunched those numbers in conjunction with less tangible factors, like star power, potential, style, etc.

The playful visual makes you think that this is, indeed, not very scientific.  But it's a hilarious (i wonder intentionally or not) rendering of why certain teams are un-watchable, regardless if they're actually winning or not.  More likely than not, having a winning record makes you "watchable."  The exception being the Washington Wizards, most likely because of Andray Blatche.  Just kidding, I know it's John Wall. 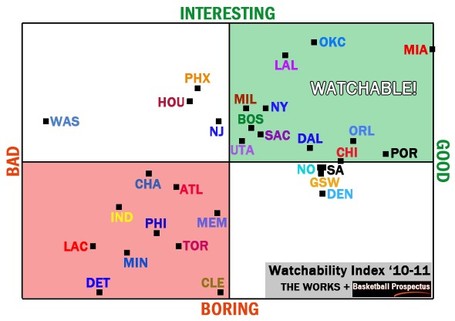 Andrew Sharp has his own questions (and comments) about the reliability of this scale.  My own questions follow similarly and here goes:

1) Minnesota Timberwolves is totally intriguing, more so than Wizards, in my opinion.  Honestly, don't you think this mismatched talent and the frustration that will boil over among teammates, coaches, and the higher-ups will suddenly blow-up into the NBA version of "Real Housewives of New Jersey"?  This sinking or sunken ship could be drama of Titanic-proportions (the James Cameron version).

2) Are the Golden State Warriors really going to be "above average" wins-wise?  If history is any indication, they will be very watchable, but also very bad.  Think Wizards position.

3) Does anyone REALLY like watching Boston?  They're low on the "watchable!" side, but still.  They're like the San Antonio Spurs of the Eastern Conference to me.

But more importantly, how does this fandom take into account fan desires for 'change' and 'parity'?  One of the things I love about sports is the possibilities for 'the upset.'  Classic Americana narratives of the 'underdog' or 'redemption' find their way into our fandom and there's always a few Cinder-fella stories that keep things balanced.  A couple years ago we thought it was the Bulls.  Either them or the Atlanta Hawks became a crowd favorite, too.  We love watching classic match-ups like the Celtics versus the Lakers, but, as "Americans," we love ourselves some "underdogs." As Sharp mentions, that darling this season could be the Clippers:

With that said, what are your thoughts about the "watchability index." What other factors do you think should go into calculating this?  And is your team improperly positioned?  And most importantly, why are the Spurs even hovering around somewhat "watchable."  That by itself should be some cause for concern!