I was as surprised as you were when I saw this final, but give credit to the Boring Bobcats, who put an end to the Nuggets’ seven game winning streak behind solid play from Stephen Jackson (23 points, 9 rebounds, 7 assists), Gerald Wallace (20 points, 9 rebounds, 5 assists) and D.J. Augustin (18 points, 6 assists). Tyrus Thomas even scored 16 points and grabbed 4 boards in a miniscule 15:22 of run (Larry Brown, I’m going to start giving you a hard time again for not playing this guy). Meanwhile, Chauncey Billups scored 25 for the Nuggets, but his potential game-tying jumper at the buzzer bounced off the rim. Carmelo scored 22, though on 8-for-21 shooting.

I was as surprised as you were when I saw this final… until I remembered that the Pistons are pretty poor this year. Luis Scola beasted it up with 35 points and12 boards, while the Rockets also got 22 and 21 from Kyle Lowry and Kevin Martin, respectively. Rodney Stuckey led the Pistons with 18 points, but three of his fellow starters - Rip Hamilton, Ben Wallace, and Jason Maxiell – combined for just 14 points.

The Lakers seem to be getting things back on track, knocking off the Wizards and the Nick Young homecoming party for their second win in a row. Kobe scored 32, Pau had an awesome all around game (21 points, 14 rebounds, 8 assists, 5 blocks), and Lamar went 24/7 on 8-for-12 shooting. Meanwhile, LA native Nick Young went off for a season-high 30 points off the bench, while John Wall double-doubled with 22 points and 14 assists.

No Andre Miller? No problem. The Blazers got an all-around balanced effort from their players sans their starting PG and ended the Suns’ three-game winning streak. After trailing by six heading into the 4th quarter, the Trail Blazers outscored the Suns 37-24 in the final frame to seal the deal. Three Blazers scored 20+, with Wesley Matthews leading the way with 24. Portland also put on a FT shooting clinic (32-for-33) that would make even Kevin Durant proud. The Suns, who shot an impressive .507 as a team, got 24 points and 15 assists from Steve Nash and 23 points from Grant Hill, but in the end it would not be enough.

After a heartbreaking loss to the lowly Bobcats, will the Nuggets get up for the Celtics, who are 9-1 at home? Methinks not.

This matchup features two of the hotter teams in the league, with the Heat riding a five-game winning streak and the Jazz winners of eight of their last nine.

Nothing to see here but big brothers beating up on little brothers. I am, however, looking forward to Blake Griffin’s first regular season matchup with the Lakers. Things might get a little testy down low.

Nothing to see here but the kids (Durant, Westbrook, & Co.) looking to beat up some other kids (Love, Beasley, & Co.) I think the visitors will take the cake in this one.

The reeling Hornets, losers of six of their last eight games, will try to get things back on track against the Pistons, who are also reeling with seven losses in their last nine. Luckily for New Orleans, they are 8-2 at home, while the Pistons are 2-10 on the road.

The Suns, who are 6-3 at home, will attempt to outscore the Grizzlies, who have not outscored their opponent in their last four games despite averaging 103 points over that span. If you’re looking for a game to bet on the over, this might be your match.

The nightly Battle of the Uglies. The Wizards, who have yet to win on the road (0-11 on the season), actually played the Lakers close in LA. Meanwhile, Paul Westphal is tinkering with the Kings lineup, probably as I type these words. As far as the Kings go, it’s one thing to say that you’re just as good on the road as you are at home, but when you’ve won just two games in each scenario through 19 games, I’m guessing this is more of a backhanded compliment than anything else.

Through Tuesday’s games, here’s a look at Mapping the Western Conference: 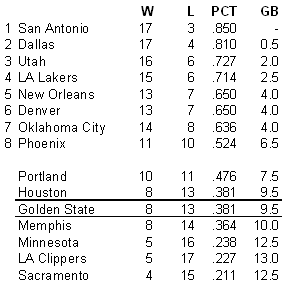