The Spurs disposed easily of the once mighty Hornets, retaining hold of the best record in the NBA while sending New Orleans to their fourth loss in five games. Tony Parker (19 points) led seven Spurs players who scored in double figures, including Gary Neal, an undrafted rookie out of Towson who received a season-high 33 minutes of run. Chris Paul led the Hornets with 16 points, but two of his fellow starters – Marco Belinelli and Emeka Okafor – made zero offensive contribution with 7 points on 1-for-9 shooting combined.

Nene Hilario (27 points) and Arron Afflalo (25 points) helped secure Denver’s one point victory over Memphis, extending the Nuggets’ winning streak to seven games and handing the Grizzlies their third straight loss. On a night when Nuggets mainstays Carmelo Anthony (4-for-20 FG, 13 points) and Chauncey Billups (2-for-6 FG, 11 points) struggled from the floor, the less celebrated Nene double-doubled (11 rebs and 6 ast) and the hardly-celebrated Afflalo stepped up big time. Meanwhile, the Grizzlies put up a balanced but valiant effort as all five starters scored in double figures. Rudy Gay led the way with 24 points. Of particular note, O.J. Mayo (3 points, 15+ mins) had his worst game since being replaced in the starting lineup by rookie Xavier Henry, who coincidentally had his best game as a pro, scoring 17 points on 8-of-12 shooting in 27+ mins.

It seems like it’s always a shootout when the Suns are involved, and this one was no different. Hakim Warrick, Jason Richardson, and Steve Nash each scored 20+, while the Suns had no answer for Wizards big man Andray Blatche (24 points on 10-for-13 FG). Despite not being his team’s high scorer for the night, Steve Nash deserves props for going a perfect 8-for-8 from the field and 3-for-3 from the line, in addition to dishing out 17 assists against only 2 turnovers. John Wall also double-doubled for the wizards with 12 points and 12 assists, though he shot a subpar 4-for-12 from the field.

Rookie Wesley Matthews scored a game-high 26 points as he helped the Trail Blazers keep the Clippers winless on the road. Marcus Camby had a ridiculous 19 rebounds to go along with 12 points against his former team, while Nicolas Batum double-doubled off the bench, scoring 13 and grabbing 14 boards in 29+ minutes. Meanwhile, the Clippers remain very much about Blake Griffin (21 points and 15 rebounds, ho hum…) and Eric Gordon (24 points). In his third and best game back from injury, Baron Davis came off the bench to score 14 and contribute 6 rebounds and 8 assists. This, of course, marginalized fill-in Eric Bledsoe to the tune of zero points and four turnovers in 23+ mins. In the end though, I’m drawn to the point that it’s not often that a team outshoots and commits less turnovers than its opponent and still loses the game, but if anyone can do it, the Clippers can!

The T-Wolves are 1-10 on the road and may be without one of their best players in Michael Beasley (sprained ankle). The Knicks have won four in a row and are 9-1 in their last ten games.

Another battle of the uglies. On the bright side for the Kings, coach Paul Westphal finally came to his senses and reinserted Beno Udrih in his starting five on Saturday. On the down side, the move didn’t help as the Kings dropped their 7th in a row. On the bright side for the Clippers, Baron Davis is back and actually producing. On the down side, the Clippers are still the Clippers. Someone has to win this game though….right?

Two of the league’s top scorers meet as Kevin Durant brings his 27.4 ppg mark into Chi-town against Derrick Rose and his 25.7 ppg. The Bulls’ Carlos Boozer has increasingly made his presence felt since returning from a broken hand, and in Saturday’s win against the Rockets, he scored 25 points and grabbed 9 boards in 30+ minutes. Durant and red-hot Russell Westbrook (19 points, 13 assists, and 7 rebounds on Sunday vs. Golden State) bring in a Thunder team that is 7-3 on the road and looking to take down the Bulls again and flex its muscle against the East Conference (they beat the Bulls on opening night and have also taken down the Celtics in Boston and the Pacers in Indiana this year).

The Grizzlies, fresh off of a one point loss to the Nuggets, will try to stop their three-game skid against the Jazz, who are coming off of a disappointing home loss to the Mavericks on Friday. I’m looking for the Jazz to play with somewhat of a chip on their shoulder and for the Grizzlies to be a little too drained to put up a good fight.

After Sunday’s games, here’s a look at Mapping the Western Conference: 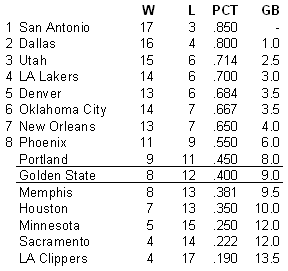