The Warriors didn't just come out swinging last night in their 109-102 win over the Portland Trailblazers, but they came out in style. Like some of their other counterparts on X-Mas rocking special holiday colorways or just coordinating to wear something festive, the Warriors rocked red shoes (of any brand) with green socks. But unlike the Oklahoma City Thunder who all wore KD's "Christmas" Yellows, the Warriors wore all kinds of kicks from all kinds of brands. The wide variety of brands makes you wonder if this many Warriors have endorsement deals. We all know Monta Ellis rocks his ME8 Sovereign "Christmas" kicks, but what are other people wearing and who wore them better? 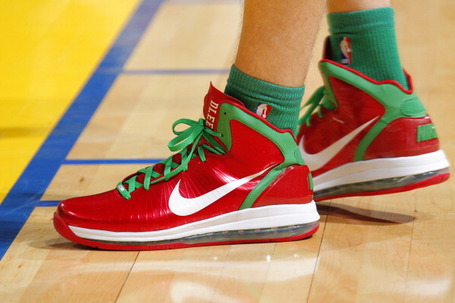 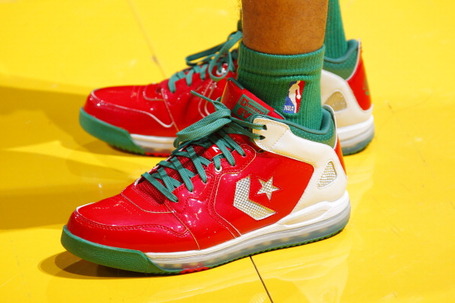 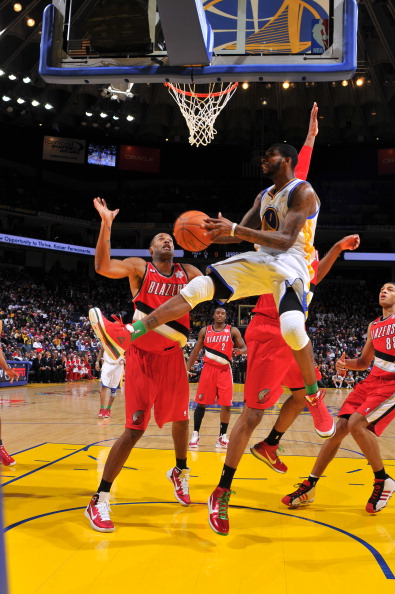 So who did it better? With the relatively amazing play by the Warriors -- only missing 2 free throws for an incredible 90.5% -- should these Warriors wear these more often?

If I had to pick any of these shoes, I would go with Acie Law's Converse. Why? Well, the Hyperdunk's ankle height is too high, in my opinion. The ankle height makes it a bit difficult to rock with pants. PEAK's intrigue me, but the huge white sole area is a bit stranger to me. I think having big white soles on any shoes is just too clunky. The Converse SICKs, however, have an interesting white portion in the back that kind of breaks up the huge chunks of red that the other shoes seem to have. The green stripe on the Hyperdunks against the red are strange for everyday wear. Hmm.

Well, if there were ever an NBA team to play in the North Pole (The North Pole Reindeers, perhaps?), at least we know there wouldn't be a shortage of shoes for that team to pick from.