Kobe Bryant scored 24 points in just under 24 minutes of play, Pau Gasol went 16/9/7, Lamar Odom double-doubled with 18 and 10, and Shannon Brown chipped in 16 points off the bench as the Lakers handled the Wizards for the second time in a week. Nick Young once again led the Wizards with 21 points on 9-for-21 shooting. Gilbert Arenas double-doubled with 11 points (5-for-15 FG) and 10 assists. The Wizards, who shot only .407 as a team, have now lost five in a row.

The Rockets continue their march toward respectability and moved within four games of .500, knocking off the hapless Kings, who were without leading scorer Tyreke Evans (foot injury). Each team featured seven players who scored in double figures, with Luis Scola (23 & 10) leading the way for the Rockets and DeMarcus Cousins and Carl Landry (17) sharing the lead for the Kings. Jason Thompson also double-doubled for the Kings with 15 and 10.

Carmelo Anthony went off for 35 points and 11 rebounds, Nene Hilario double-doubled with 10 & 10, and four other Nuggets scored in double figures as Denver knocked off the Eastern Conference juggernaut Orlando Magic. After entering the fourth quarter with a one point lead, the Nuggets outscored the Magic 32-16 in the final frame to earn the win. J.J. Redick exploded off the bench for 29 points, while Dwight Howard did his usual - 21 points and 14 rebounds.

The Clippers have yet to win a game on the road (0-10). The Sixers are at least competent at home, where they have earned seven of their nine victories. Philadelphia has won four of its last five and Jodie Meeks is scoring 15 ppg in his new role as the starting two guard. Chris Kaman remains out for the Clippers, while Baron Davis is being heckled by his owner.  I don't count on the Clippers earning their first road win in this one.

Oklahoma City, winners of three in a row, meet the suddenly awake Houston Rockets, who are looking for their first winning streak of the season (three wins in a row).

The Spurs have won five in a row, and ordinarily, one would not hesitate to dismiss the Bucks against arguably the NBA's top performing team. However, our Milwaukee-an friends have won three in a row themselves, including a 103-99 win @ Dallas on Monday to end the Mavericks' 12-game winning streak. Unfortunately for Milwaukee, the Spurs are probably aware of this fact and wouldn't want to fall victim to the same fate as their Texan brethren/rivals.

After the Bucks came into town to snap the Mavericks' 12-game winning streak, Dallas will look to get back on track against the Blazers. Portland's best player, Brandon Roy, has failed to score more than nine points in three of their last four games, thanks in no small part to a bum knee.

November 28, 2010: The Pacers came into Staples Center and stunned the Lakers 95-92. December 15, 2010: The Lakers seek revenge. Danny Granger (sprained ankle) sat out the Pacers' last game on Monday as they were thumped by the Bulls, 92-73. With the Lakers, who just got Andrew Bynum back, now firing on all cylinders, Indiana will need all it can get from Granger, if he can indeed return.

Both teams are looking to end skids, as the once red-hot Hornets are now 3-7 in their last ten, while the Kings continue to dwindle and may even be without RekeDaFreak. I'm looking for the Hornets to get things back on track on Wednesday.

The Grizzlies are respectable (7-5) at home and are surprising winners of their last three. The boring ol' Bobcats are 3-9 on the road, but have beaten the Grizzlies in their last four meetings. I don't think that trend will continue in this one, however.

The T-Wolves are 1-13 on the road, but the Suns are only one game above .500 (6-5) at home. The Suns might get C Robin Lopez back, but it's not like I expect that to give the Suns a suddenly shutdown defensive unit. I expect a lot of points to be scored in this one as Michael Beasley (21.2), the West's 10th leading scorer, and Kevin Love (20.2 ppg), the West's 14th leading scorer, come into town.

After Tuesday's games, here's a look at Mapping the Western Conference: 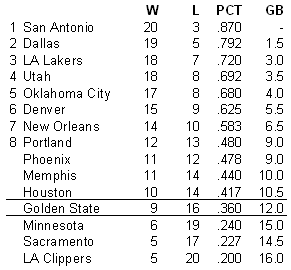