The second quarter was filled with ridiculousness unimaginable. And here are some of the highlights...or rather low lights. And the reason I highlight the lowlights is mostly because the Warriors have a penchant for self-destruction in the third quarter, so any ra-ra might be us zealous fans speaking too soon.

1. What's up with the He-Man hair? Andrei Kirilenko's hair needs a haircut and his beautiful wife needs to let him know so. Tom Brady couldn't pull it off, but what can we say when he's married to Giselle. Dirk Nowitzki has this Lord of the Rings/Viking look going on, which seems to match his new defensive minded play. But Kirilenko looks like he hired my mom, who only knows what style: the bowl cut and all it's derivations for men and women. 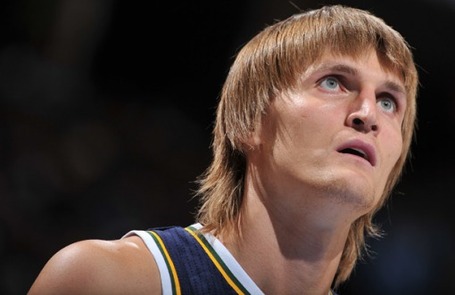 Jeremy Lin is known for driving into the paint only to get his shot blocked. It's almost guaranteed. Lin doesn't exactly give himself very good chances to help his team when he drives into a lane packed with big guys. David Lee looks like he taking tips straight out of Lin's book of bad shots. Shooting 2-8, Lee is struggling not only to get his shots off (getting blocked three times), but he's also forcing up some pretty challenging shots against taller and stronger guys. Someone needs to set-up him up, please.

Wright shooting tons of 3s bothers me considering that he is relatively effective shooting within 10-15 feet. He had one nice drive and another nice bank shot from the wing. He's drives to the basket are a little scary given how bad his aim tends to be. But his efficiency as of late has been to NOT shoot 3s.

Honestly, how is a guy who averages 2 points a game already have 6 points, all off highlight reel dunks in traffic. C'mon guys, really?

The Warriors are clearly hustling, but the problem is that their court awareness is terrible. The Warriors haven't been able to secure loose balls tapped out from rebounds. There's often missed defensive rotations. Luckily the Jazz only shot 40% for the half