Rudy Gay blocked Ron Artest’s 3-point attempt to seal the victory and send the Lakers to their third consecutive loss. Mike Conley scored 10 of his team-high 28 points in the fourth quarter. The Lakers outrebounded the Grizzlies 42-29 and shot .436, not a terrible figure, though they were only 7-for-22 from downtown. Kobe led the Lakeshow with 29 points but on 9-for-25 shooting (.360). Every member of the Grizzlies’ starting five scored in double figures.

This was truly a meeting of teams going in opposite directions. The Sixers extended their winning streak to six games by holding the Blazers to a mere 11 points in the fourth quarter and sending Portland to their fourth straight loss. Elton Brand scored 18 but somehow grabbed only 2 rebounds. The Blazers shuffled their starting lineup and inserted Wesley Matthews in place of Nicolas Batum, and the move paid off as Matthews scored a game-high 26 points. LaMarcus Aldridge double-doubled with 20 points and 12 rebounds. Brandon Roy was relatively quiet with 10 points on 3-for-9 shooting.

A couple nights after knocking off the Lakers in LA, the Pacers traveled up north and defeated the considerably less formidable Kings, who have now lost five in a row. Danny Granger had a game high 37 points, while Darren Collison added 17 and Roy Dr. Hibbert had 16. RekeDaFreak was the only Kings starter to net double digits as he went for 16 points, 7 boards, and 9 assists (albeit against 6 turnovers). The Kings’ top two scorers for the night both came off the bench, as Beno Udrih had 24 points while DeMarcus Cousins scored 20. Meanwhile, their starting counterparts, Luther Head and Samuel Dalembert, combined for 10 points on 5-for-16 shooting (.313). How much longer will Paul Westphal continue to start these guys?

Portland has lost four in a row, while Boston has won its last four. Can the Blazers stop the bleeding against a Celtics team that is 7-1 at home? Methinks the answer is no.

The Hornets have lost four of their last five games after starting the season 11-1, but they return home, where they are 7-1, and they’re taking on the hapless, boring ol’ Bobcats, who may be without Gerald Wallace (elbow). I think some home cooking will do the Hornets well.

The Lakers look to end their 3-game skid against a Houston team that they barely beat on opening night, 112-110. The Yao-less, Brooks-less Rockets have lost six of their last eight games and could use another signature win after knocking off the upstart Thunder just three nights ago (they failed to keep the momentum going with a loss @ the Mavs on Monday). I’m looking for a big night from Kevin Martin, who has been lighting it up to the tune of 22.6 ppg, and Luis Scola, who is averaging over 20 ppg and nearly 10 rpg. However, I’m guessing some stern talking in the locker room will have the Lakers digging deep for a win against a team that they absolutely should NOT lose to if they plan to march to back-to-back championships.

Here’s a battle between two teams trending upward. The Jazz are winners of their last six, including a recent win over the Lakers. The Pacers don’t have a long winning streak going, but they too knocked off the Lakers recently – in LA, no less. The matchups in this one are intriguing as ultra fast Darren Collison takes on superstar Deron Williams, gangly Danny Granger takes on gangly Andrei Kirilenko, while down low Roy Dr. Hibbert faces off with Al Jefferson. I’m looking for Paul Millsap to expose his matchup advantage against former Dukie Josh McRoberts and for the Jazz to pull off a closer victory than one might expect.

Dallas goes for its seventh win in a row against the struggling T-Wolves, losers of their last four. Dirk continues to lead the way with 25.7 ppg (4th in the league) while getting next to nothing from any of his teammates outside of Jason Terry (16.1 ppg). Michael Beasley is still putting up a solid 21.6 ppg, while Kevin Love, who is leading the league with 14.9 rebounds per game, is going for his third straight 20-20 game. Barring a Mavs meltdown, though, I think both teams will keep their streaks intact.

Carmelo Anthony exited the Nuggets’ game on Sunday early with flu-like symptoms, but the Nuggets still managed to outscore the Suns 138-133. The Bucks haven’t been outscoring much of anyone lately, as they have lost six of their last seven games. I’m guessing Carmelo returns for this game and helps push Denver’s winning streak to five games.

Best in the West meets Worst as the Spurs try to beat the Clippers for an amazing 19th time in a row. I’d like to think that the Clips have a fighting chance but the Spurs are a ridiculous 8-0 on the road and the Clippers are a mess, even with Eric Gordon (24.2 ppg) and Blake Griffin (20.2 ppg, 11.6 rpg) putting up some good numbers. The problem is, hardly anyone else in the Clippers lineup is doing anything. This one might get ugly.

After Tuesday’s games, here’s a look at Mapping the Western Conference: 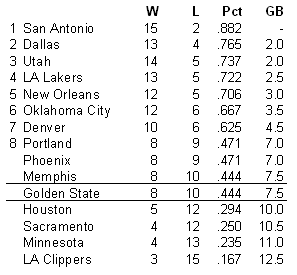