Mo Williams scored a team-high 25 as the Cavs defeated the Grizzlies for the seventh consecutive time in . Williams double-doubled on the night as he tallied 12 assists along with 5 boards and 2 steals. Rudy Gay led with 17 points, while Zach Randolph double-doubled with 13 points and 11 boards.

The good news: each member of the Heat’s Big 3 scored 22+ points. The bad news: the rest of the team did nothing. Tyson Chandler racked up 17 rebounds against the size-deficient Heat, Caron Butler scored 23, and Dirk scored 22 to lead the Mavs to their fifth straight win. The Mavericks outscored the Heat 31-17 in the 3rd quarter to build an 82-66 lead heading into the 4th that would not be surmounted.

Derrick Rose, who missed the previous game with a neck injury, returned to the floor and proceeded to score a team-high 30 points to go along with 7 rebounds and 7 assists. The Bulls held the Kings to 9 points in the 4th quarter en route to turning a 7-point deficit into an 11-point victory. A day after I called out Sam Dalembert for being relatively useless on the offensive side of the ball, the big man scored 12 points, marking just the second time this season he has reached double digits. Jason Thompson led the Kings with 18 points while the Luther Head starting experiment didn’t work out so well – he had only 3 points. The Kings got an abysmal contribution from the bench (22 points total on 9-of-30 shooting), while key bench player Francisco Garcia missed his second straight contest with the flu.

The Nuggets are on a mini-roll, riding a 3-game winning streak and a 5-game home winning streak. The Suns are coming off a victory over the Clippers, which can’t be construed as a roll of any type.

After being "upset" by the Jazz, the Lakers come back home with a chip on their shoulder against a Pacers team that has never beaten them in the . The Pacers just lost a close one to and could use a signature win to get things going. Five of their wins this year have come against (6-11), Philly (4-13), (7-9), and the Clippers (3-14), while another has come against the anti-chemistry Heat. (They did manage to knock off in a 144-113 shootout).

The Thunder have won five in a row on the road and are 6-1 away from home so far this season. The Rockets are just kind of sad right now as they are coming off a loss to the lowly Bobcats… well, the not-so-lowly Bobcats, considering the Rockets have 2 less wins than the Bobcats do.

After coming back to beat the Lakers, the Clippers should be no trouble, right? But that’s when the Clips come ’n get ya. Just when you think you’re going to cake-walk your way to another 48 minutes of pure dominance, the Clippers come and fight for about 12 of those.

The Nets won 12 times in 82 games last year, and they’re almost halfway there in 16 games this young season. Brandon Roy returned to the Blazers lineup on Friday and scored 27 points, but the rest of his team did almost nothing. The Nets, meanwhile, are an almost respectable 3-4 at home. It’s not that I expect the Nets to win, I’m just saying it wouldn’t be a miracle upon miracles if they do win.

After Saturday’s games, here’s a look at Mapping the Western Conference: 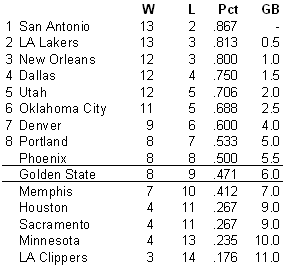