The Bobcats used a third quarter rally to hand the Rockets their 5th loss in the last 6 games. Gerald Wallace (21 pts, 14 rebs) and Boris Diaw (20 pts, 10 rebs) double-doubled for the Bobcats, while Chase Budinger led the Rockets in scoring with 19 points off the bench. Kevin Martin and Luis Scola, Houston’s top scorers, combined for 27 points but did so on 10-for-28 shooting from the field (.357) and 4-for-10 shooting from the line. Shane Battier also had an off night, going 1-for-9 from the field for 2 points.

Russell Westbrook went off for 43 points, 8 rebounds, and 8 assists to lead the Thunder to their 8th win in their last 10 games. Throughout the night, Kevin Durant’s shot was off, as he finished with 25 points on 9-for-26 shooting (.346), although he scored 11 in the final two minutes of regulation and overtime. Both Thabo Sefolosha (13 pts, 10 rebs) and Jeff Green (15 pts, 14 rebs) double-doubled for the Thunder. Danny Granger led the Pacers with 30 points.

The Mavs ended San Antonio’s perfect November with the help of a huge fourth quarter rally, outscoring the Spurs 32-21 for the 9 point victory in San Antonio. Dirk led the way with 26 points, while Manu Ginobili was the high scorer of the night with 31. Despite Tyson Chandler’s unthinkable 13-for-16 night from the FT line, the Mavs went 20-for-31 as a team from the charity stripe, and still managed to end the Spurs’ winning streak at 12 games. Ginobili and Tim Duncan (15 points) were the only two Spurs starters to score in double figures, as neither Tony Parker (4-for-12 shooting, 9 points) nor Richard Jefferson (0-for-4 shooting, 2 points) could get anything going.

The Nuggets held the Bulls off with a buzzer beater by Carmelo Anthony, who finished the night with a team-high 22 points. Denver managed to squander a 19-point, third quarter lead before coming back for the win. Former Warrior CJ Watson, who started for Derrick Rose (sore neck), blew up for 33 points for the Bulls. The Nuggets also played without their star point guard, Chauncey Billups, who is out with a wrist sprain and a broken nose. Ty Lawson filled in admirably with 17 points, while Nene had 18. Denver has now won 3 games in a row.

The Jazz are on a roll again, coming back from an early 16-point deficit to extend their winning streak to 4 games and hand the Lakers their 3rd loss of the season. Deron Williams was nearly perfect, finishing the night with a team-high 29 points on 10-for-14 shooting from the field (3 3-pointers) and 6-for-6 from the line, and dishing out 12 assists against just 2 turnovers. Al Jefferson also chipped in 20 points. KoBeef led the Lakers with 31 points, while both Pau Gasol (21 pts, 11 rebs) and Lamar Odom (16 pts, 10 rebs) double-doubled. Overall the Lakers shot just .418 from the field, compared to .494 for the Jazz.

You didn’t actually think the Clippers could win three in a row, did you? Jason Richardson scored 29 while 6th man Hakim Warrick had 25 as the Suns held off the upstart Clippers, who had won 2 in a row coming into Friday’s game. The Clippers shot surprisingly well from the field (.506) as Eric Gordon dropped 32 while both Blake Griffin and Ryan Gomes scored 20, but it wasn’t enough for the Suns, who had 5 players score 12 points or more.

After almost a week-long layoff, the Blazers returned to action and were dominated at home by the Hornets. 6th Man Wilie Green led New Orleans with 19 points, while CP3 did his usual – 16 points, 13 assists, 6 rebounds. Brandon Roy, who had been out the past 3 games with soreness in his knees, returned to action and led the Blazers with 27 points. Unfortunately for Portland, he was just about the only bright spot for the team, which shot .395 on the night. Three of the Blazers’ starters - Andre Miller, Marcus Camby, and Nic Batum – combined for 18 points on 7-for-21 shooting. Meanwhile, the Hornets had five players in double digits.

The Warriors look to stop their 5-game losing streak and their 3rd road victory of the season against a scrappy T-Wolves team. K-Love, the NBA’s top rebounder, has been hot with 4 consecutive double-doubles, while Darko Milicic has had a pulse with 22 ppg over his last 3 contests. David Lee will be a game-time decision for the Warriors.

The Grizzlies have a modest 3-game winning streak going and bring their act to Cleveland, where they have lost 6 in a row. Antawn Jamison is suddenly alive and averaging 14.4 ppg in his last 9 games. Memphis is coming off of a close victory over the Warriors on Friday night, and is currently experimenting with OJ Mayo coming off the bench. It worked well against Golden State as Mayo scored 23 points.

After cooling off the hottest team in the NBA, the Mavs look to slap around the underperforming Heat. The newest Big Three just snapped a three-game losing streak against King James’s old team on Friday, but the Heat are still a mediocre 2-4 on the road. Dallas, meanwhile, looks to extend its 4-game winning streak on the shoulders of its Big One – Dirk, who is averaging 26.3 ppg.

Sacramento, who is 1-9 in its last 10, take on the Bulls, who sit atop the Central Division in the East Conference and are coming off a dramatic 1-point loss to the Nuggets. Note that the Bulls were without their leading scorer Derrick Rose against the Nuggets, and he is expected to return on Saturday. The Kings, who are coming off of an embarrassing loss at the Clippers on Thanksgiving Day, continue to experiment with Luther Head starting over Beno Udrih, and have gotten next to no offensive contribution from starting C Sam Dalembert (4.1 ppg).

After Friday’s games, here’s a look at Mapping the Western Conference: 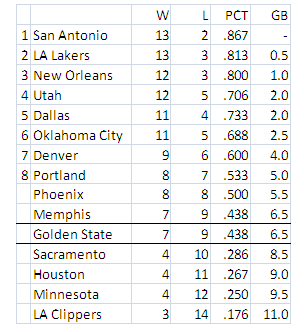