86 @ Washington 89. Despite shooting an atrocious .378 from the field, the Wizards escaped with a three point victory over the sliding Grizzlies, who have now lost 5 in a row. Gilbert Arenas (7-for-15, 24 pts) and Kirk Hinrich (6-for-12, 22 pts) shot decently enough for the Wizards, but the rest of the team combined for 15-for-47 (.319) shooting, including twin 1-for-8 outings from Al Thornton and Nick Young. I guess the Grizzliers were just that bad tonight. Zach Randolph (19 points) led the way for Memphis, who hasn’t won in 12 days.

89 @ 84. The Thunder rolled on, defeating the Celtics in and doing so without two of their three best players. Despite free throw coach/world beater Kevin Durant nursing a twisted ankle and third-leading scorer Jeff Green out with a sprained ankle of his own, the Thunder managed to hand the Celtics their first home loss of the season. This game went dead in the water in the fourth as OKC managed just 12 points in the final frame, while fared barely better with 15 points. Russell Westbrook paced the Thunder with 31 points, although he posted a less-than-stellar 6 assists against 7 turnovers. KG led the Celts with 16 points, including 10-for-10 FTs.

Houston 96 @ 106. Six Raptors scored in double figures as the Raptors extended the Rockets’ losing streak to three games. Andrea Bargnani had a team-high 26, while Kevin Martin led the Rockets with 31 points, including 11-for-11 FTs. Kyle Lowry had a solid night with 11 points, 12 assists, and 7 boards.

101 @ 108. The Hornets are gearing up for another winning streak. David West beasted his way to 34 points on 14-of-20 shooting and added 11 boards and 3 blocks. The Cavs got a pretty anemic effort from their starters, as only one of their starting five – Anderson Varejao – scored in double figures. Antawn Jamison turned in his first double-double of the season, leading  off the bench with 20 points and 11 boards.

LA Lakers 112 @ 95. Facing the T-Wolves for the second time in 11 days, the Lakers made quicker work of their opponents after surviving a scare in Staples the last time around. Matt Barnes came out of nowhere for a 24-point, 7-reb, 6-ast night, while KoBeef chipped in 18 and acquitted himself nicely with a 16/14/6 night of his own. Darko had an unbelievable stat line (for him), posting 23 points, 16 boards, 5 assists, 2 steals, and 6 blocks. Mike Beasley brings me one step closer to believing as he extended his streak of 25+ point games to six with a team high 25, tossing in 10 boards and a couple of steals and blocks. He did manage to turn the ball over six times though. Kevin Love did his best disappearing act and recorded 0 points on 0-for-7 shooting.

94 @ 82. The Jazz fell apart at home at the hands of recent tabloid thrill seeker Tony Parker, who led the Spurs with 24 points. Timothy Duncan double-doubled for San Antonio, who, by the way, have won THEIR LAST NINE GAMES and are now 10-1. Deron Williams had one of his rougher games of the year, posting a team high 23 points, but doing so on 7-for-19 shooting, and notching a season-low 5 assists.

88 @ 83. The Bulls simply dominated the glass in this one as Taj Gibson and Joakim Noah outrebounded the entire Mavs team. Taj grabbed 18 rebounds while Joakim grabbed 17, and their 35 rebounds combined were one more than the 34 the Mavs team grabbed for the evening. For , the story was pretty much Dirk and no one else. The Big German had 36 points, while Caron Butler, in his second game back from back spasms, was the only other Mav to reach double digits with 12 points.

81 @ 86. RekeDaFreak scored 20 to help the Kings stop their losing streak at six games. The Nets were led by Kris Humphries, who doubled-doubled with 18 points and 10 rebounds. Beno Udrih, coming off the bench again in coach Paul Westphal’s new lineup configuration, scored 12 points in 21+ minutes, while new starter Luther Head scored 10 points in 31 minutes. DeMarcus Cousins had a solid game despite poor shooting (2-for-8 from the field), totaling 8 points and 10 rebounds in 29+ minutes off the bench. Starter Sam Dalembert put up 1 point (0-for-4 from the field), but he did grab 8 boards in just over 19 minutes of run.

(7-4) @ (8-4). looks to bounce back from a poor shooting night against the Bulls, while the Hawks, winners of their last two, have been idle for three days. The Mavs need to make it more than just the Dirk show against a balanced Hawks team that has three starters averaging 15+ PPG.

(8-4) @ (5-7). The Thunder might not get Durant back for this one, but considering that the Thunder disposed of the Celtics last night, they can’t POSSIBLY lose to the Bucks, right? (I’m looking for a let-down here after that draining win). The Bucks are coming off of an 11-point loss @ the Sixers.

(4-8) @ (6-6). Carmelo faces the other team that wanted to trade for him. Kris Humphries will try to prove again why he deserves a job in the NBA.

(5-8) @ LA Clippers (1-12). The Clippers have to win again, sometime this season, right? My man Ronny Turiaf came back to form for the Knicks with a 7 point, 8 assist, 4 rebound, 3 block night against the Warriors on Friday. The man has heart…. Get it?  (Crickets.)

(8-4) @ (4-9). The Heat have cruised during their current 3-game winning streak, while the Grizzlies have lost five in a row. Do I smell a trap game? Interestingly, the individual player matchups don’t look too terribly far off. Arroyo-Conley. Wade-Mayo. LeBron-Rudy Gay. Bosh-Randolph. Ilgauskus-Gasol. I think this one will be surprisingly closer than one might expect.

(8-5) @ (8-5). This would be a fun matchup if not for injuries to Brandon Roy and Greg Oden. At least the Trailblazers will have home court advantage, so there’s a chance this is still a very well-contested game.

At the end of Friday’s games, here’s what Mapping the Western Conference looks like: 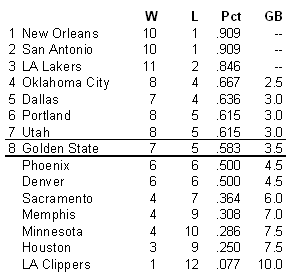