72 @ 89. The Magic rode a tenacious defensive effort to victory over the Grizzlies, holding Memphis to a .362 shooting percentage, including 18 points on 3-of-32 shooting combined by the Grizzlies’ top two scorers, Rudy Gay and Zach Randolph. D-Howie went for 18 and 14 and even hit a respectable 8-for-11 from the line.

New Orleans 95 @ Dallas 98. The Mavs handed the Hornets their first defeat of the season behind 26 points from Jet Terry and 25 & 10 from Dirk. Hornets PG Chris Paul did his usual (22 pts, 9 ast, 3 stl) but he got little support from his fellow starters, although Peja Stojakovic scored a season-high 17 points off the bench in under 20 minutes of run. Dallas SG/SF Caron Butler missed his third straight game with back spasms.

115 @ 108. The Thunder finally stopped the buzz saw that was the Utah Jazz on Monday night. After posting come-from-behind victories in their last five games, the Jazz could not make it six in a row, despite valiant efforts from Deron Williams (31 points), Paul Millsap (20/6/6), and…. C.J. Miles? (16 pts off the bench). Kevin Durant led the Thunder with 30 points, including 16-for-16 at the free throw line (he only shot 6-for-17 from the field though). Russell Westbrook chipped in 22, including 6-for-6 from the line (as a team the Thunder shot 33-34 FTs…shame on you, James Harden!). Perhaps the most unexpectedly impressive night came from Serge I-BLOCK-a, who went for 22 points, 11 boards, and 4 blocks.

110 @ LA Clippers 96. I had the "privilege" of attending this game tonight and it truly was a battle of ugly. Early in the second quarter, Devin Harris earned a flagrant type 2 when he took down Blake Griffin as BG drove to the hoop on a fast break. There was nothing malicious about Harris’s actions, but the fact that went down seemingly awkwardly made it look worse than it was. In any event, I could recognize why the Clippers have only one win on the season (and they were probably lucky to get that). The "Amazin’" Nets held the Clips to .395 shooting, including an interesting 6-for-20 FG / 16-for-20 FT night by Eric Gordon (30 points). With BD and Kaman out again with injuries, the Clippers starting 5 was as follows: Eric Bledsoe, Eric Gordon, DeAndre Jordan, Blake Griffin, and Al-Farouq Aminu. There’s a lot of youth and potential there, but they were not much of a match for the Nets, who were led by Brook Lopez (24 points) and former Clipper Travis Outlaw (23 points). I’m not sure Brook Lopez posted up once all night as most of his shots were from 20 feet out. Ridiculousness. As a team the Nets shot .597. I’m willing to bet they don’t reach that figure again this season!

110 @ 113. Just as I was calling out Larry Brown for not playing Tyrus Thomas enough, Ty goes off for 20/10 in almost 31 minutes of run. Of course Tyrus’s 0:7 Assist:Turnover ratio can’t be helping his cause. In any event, Stephen Jackson and Gerald Wallace led the way for the Bobcats with 26 points apiece. Mike Beasley is starting to make a believer out of me as he put up 28 points, the fourth game in a row he has gone for 25+. Darko also contributed the best game of his season (13 pts, 12 rebs, 5 ast, 4 blk), while Kevin Love fell one rebound short of a double-double in the losing effort for the T-Wolves.

94 @ 100. The Suns prevailed in the of the Laker Conquerors behind a balanced scoring night and a strong finish. Trailing by seven heading into the fourth, the Suns outscored the Nuggets 31-18 in the final period to pull off the victory. Six Suns players scored in double figures, led by 6th man Hakim Warrick, who had 21. Carmelo had a pretty ridiculous game as he led Nuggets scorers with 20 points and also pulled down a career-high 22 boards. A night after going 22-for-40 from downtown, the Suns (predictably) cooled off and hit just 4-for-20 3s.

(6-5) @ (4-7). The Trailblazers bring a 2-game skid into , while the Grizzlies try to stop their own 3-game losing streak. Brandon Roy left the last game with soreness in his knee and his availability for Tuesday’s game is in question. The Grizzlies will look to bounce back from their worst shooting night in two seasons.

(3-7) @ (5-5). Carmelo, coming off his first career 20 rebound game, faces one of the teams he was rumored to join in the offseason. The Knicks, led by That’s Amare in both scoring (20.8) and rebounding (8.1), are losers of their last five games. NYK hopes to get some of its defensive swagger back when/if Ronny Turiaf (knee) is able to return to the court; he is currently day-to-day.

LA Lakers (8-2) @ (5-5). The Lakeshow tries to bounce back from consecutive losses against the league’s top defensive team. The Bucks (who would’ve thought?) are allowing a league-low 89.4 points per game. I’m guessing Kobe, Pau, and Co. say "pish posh" to that and take Brandon Jennings to "school" …. Get it? (Of course and didn’t go to college either…so I’m not sure how terribly sophisticated this school might be.)

(5-3) @ (3-6). The circus is in town, so is starting its annual two-week November road trip. First up: , where the Bulls will take on the -less, Brooks-less Rockets. (Of course the Rockets have won their last two without – and don’t they always seem to perform better when is hurt?) Leading the charge for the Bulls (I crack myself up) will be Derrick Rose (23.6) and Luol Deng (20.3), who are both averaging over 20 ppg, while the Rockets feature their own 20 ppg duo in Kevin Martin (24.1) and Luis Scola (22.1).

At the end of Monday’s games, here’s what Mapping the Western Conference looks like: 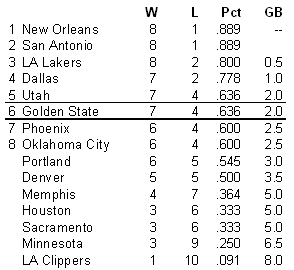