Videos and links galore, presented by Golden State of Mind's IQofaWarrior! For those that missed it, video recaps to keep up updated on how awesome and then how poorly they executed in the first and second half, respectively. Tons of recaps and one well circulated quote by Monta Ellis about minutes:

But here is some statistical weirdness from last night's game.

Rebounding: Dan Gadzuric had 11 rebounds in 12 minutes. 4 of these rebounds were offensive. But all 4 of them came in one possession in the 4th quarter he was unable to go up strong and finish a play with Charlie Villanueva on him. He was also 0-6 from the floor.

Free throws: At one point, the Pistons had taken 21 free throws in a row.

Dorell Wright: 15 points, 7 rebounds and 6 assists. And 1 HUGE steal in the fourth quarter that sealed the game.

And I just had to rehost this from the Golden State of Mind Link Dump thread. Courtesy of Phithiest on Smart's substitutions: 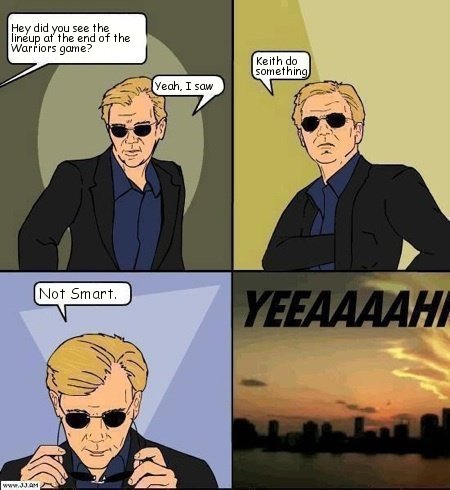