Taking a look back at Friday and Saturday’s Western Conference action, the Jazz extended their winning streak to 5, is suddenly on fire, and the Trailblazers took two hard losses.

90 @ 86. The Jazz overcame a second-half deficit for the fourth straight game, this time outscoring the Hawks 27-17 in the 4th for the four point victory. Deron Williams led the charge with 24 points while Andrei Kirilenko continued his resurgence with a double-double (14 pts/12 rebs). The Hawks probably had no one to blame but themselves, as they shot an atrocious 11-for-21 on FTs (52.4%). $119M man Joe Johnson paced ATL with 23.

103 @ 112. By now you’ve heard of Kevin Love’s historic 30-30 night, the NBA’s first in 28 years. Love (31 pts/31 rebs) and Michael Beasley (35 points) got the job done for Minny. Sebastian Telfair not so much; he managed some assists this time (8) but he scored zero points in 36+ minutes. The entire Knicks starting five was in double digits, with Danilo Gallinari the leading scorer with 25. As a team the Knickerbockers shot 38% from the field.

102 @ Indiana 99. Brad Miller went 2003 mode and helped the Rockets surprise the Pacers on the road with a three point victory. Miller, who has adjusted to becoming part-time/bench player in the past two-plus seasons, started in place of the injured and poured in 23 points to go along with 8 rebounds and 5 assists. James Posey led the Pacers off the bench with 19 points.

90 @ Dallas 99. The Mavs had six players in double figures, with Jose Juan Barea leading the way with 19. Dirk, who is playing with a sprained ankle (and thus I can forgive him a little for not dropping 25+ every night), had 16 points. Andrei Iguodala made his return but shot only 5-for-13 for 13 points, while Jrue Holiday cooled off a little as he scored only 11. did double-double though as he had 13 assists against 1 turnover.

89 @ 103. The Kings lost their 10th in a row in as Steve Nash went 28-14-7 (pts/ast/reb). Carl Landry double-doubled with 20 and 11 but it wasn’t enough for the Kings, who now have lost 4 games in a row. RekeDaFreak, who scored a season-low 5 points in his previous game, made a triumphant return to the scoresheet with an (pts/ast/reb) night.

108 @ 110. The Thunder used a 10-0 run late in the game to seal the close victory. As expected, the dynamic duo of Westbrook and Durant got’er done for the Thunder as they scored 36 and 34 points, respectively. Durant, however, tainted his name by missing a FT (5-for-6). Brandon Roy shook off any knee woes and put up a valiant effort with 24 points. Nic Batum continued his breakout season with 21 points.

113 @ LA Clippers 107, OT. Charlie Villanueva, who has made recent headlines for his battle of wits with KG, took care of business on the court with 30 points, including 5 3-pointers. Eric Gordon returned for the Clips and led them in scoring with 28 points. Blake Griffin double-doubled with 18 points and 18 rebounds. Baron Davis and Chris Kaman remain out with injury.

Utah 96 @ Charlotte 95. came back AGAIN, this time outscoring the Bobcats 63-46 in the second half to notch their 5th straight comeback victory. Deron Williams hit a jumper with 0.8 seconds left to seal the win. Al Jefferson led the Jazz with 19 points. Nazr Mohammed went for 22 points and 20 rebounds, while Steven Jackson led Bobcat scorers with 24.

87 @ 107. The Hornets continued their perfect season and improved to 8-0 behind a balanced scoring attack. Seven Hornets players scored in double figures with Marco Belinelli and David West leading the way with 18 points apiece. Roy, who looked fine health-wise in the Trailblazers’ last game, was bothered by soreness in his knee and managed only 2 points in 22+ minutes. Nic Batum led with 16 points.

116 @ 110, OT. Paul Pierce scored 28 points as the Celtics held off a feisty Grizzlies team. Rudy Gay led the Grizzlies with 22 points and Zach Randolph double-doubled with 21 and 11.

93 @ 116. The 76ers were never really in this game as the Spurs cruised to victory behind Tony Parker’s 24 points and Manu Ginobili’s 18. DeJuan Blair double-doubled with 13 and 12. Jrue Holiday led the Sixers with 16 points, but and Iguodala were the only starters with double digits (Iguodala had 10 points in 19+ minutes).

At the end of Saturday’s games, here’s what Mapping the Western Conference looks like: 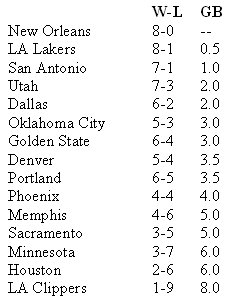