The only other Western Conference game outside of the Warriors' loss at Chicago saw the Nuggets rallying to beat the Lakers in Denver, 118-112. The Nuggets (5-4) rode an 11-0 run late in the game and outscored the Lakers 33-19 in the 4th quarter to hand the Lakeshow (8-1) their first loss of the season. Leading the way for Denver was Carmelo Anthony, who double-doubled with 32 points and 13 rebounds. Kobe scored a season-high 34 to lead the Lakers, while Shannon Brown chipped in 19 off the bench. Pau Gasol had an off shooting night (6-for-17 from the field) but pulled down 20 boards.

Utah (5-3) @ Atlanta (6-3). Will the Jazz put together their 4th big rally in a row, this time in A-Town? ATL F/perennial tease Marvin Williams remains out with a bone bruise in his right knee.

New York (3-5) @ Minnesota (2-7). The T-Wolves try to string together consecutive wins against a Knicks team that has lost 3 in a row. MIN F/perennial tease Michael Beasley, fresh off a career-high 42 point night, tries to prove to fantasy owners that THIS will be his breakout season.

Sacramento (3-4) @ Phoenix (3-4). The Kings bring a 3-game skid into US Airways Center, a building in which they have won only once in their past 10 contests with the Suns. (Their last win @ PHO was Nov. 6, 2005). The Suns, meanwhile, are still trying to figure things out in the post-Amare era. Channing Frye is following up last season's breakout campaign with 4.9 points per, while Robin Lopez is averaging just 5.7.

Detroit (2-6) @ LA Clippers (1-8). No BD, no Kaman, no Eric Gordon... no problem? The Clips' rookie trifecta of Blake Griffin, Al-Farouq Aminu, and Eric Bledsoe will attempt to put the franchise on their collective back and end their 4-game losing streak against an aging Pistons team that got handled 100-78 @ Portland on Tuesday.

Houston (1-6) @ Indiana (3-3). Indiana somehow made its first 20 shots in the 3rd quarter of its last game. Yao is out a week with a left ankle sprain. Aaron Brooks is out for a bit longer. I don't expect Houston to earn their first road victory of 2010-11 on Friday.

Philadelphia (2-6) @ Dallas (5-2). Dallas looks for their 3rd win in a row while Caron Butler (back spasms) attempts to make it back out on the floor. The 76ers' Andre Iguodala is also questionable, while Louis Williams suffered a separated AC joint in Wednesday's game. I'm looking for Jrue Holiday, who is averaging 21.7 ppg over his last 3, to step up again.

Portland (6-3) @ Oklahoma City (4-3). Perhaps the most intriguing matchup of the night, Portland visits the Thunder having beaten them in their last 3 matchups in Oklahoma City. Trailblazers leading scorer Brandon Roy might be hurting again after experiencing some swelling in his twice-surgically repaired left knee. I don't expect Kevin Durant or Russell Westbrook to take it easy on Roy.

At the end of Thursday night, here's what Mapping the Western Conference looks like: 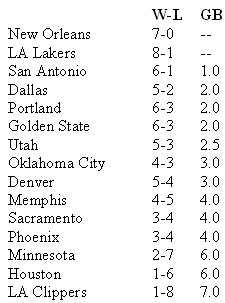