Share All sharing options for: Can't Touch Stephen Curry With A 10,000-Foot Pole

The theme for the Warriors this summer and possibly all of last season was "everyone is available, except Stephen Curry."  But does the blossoming combo-guard, with only a few wins under t his belt and an infectious smile, deserve the "untouchable" label? For argumentative reasons only, is anyone on a team this consistently bad deserve a "pass"?

For some perspective, let's take a trip back in time to San Francisco, 1965. 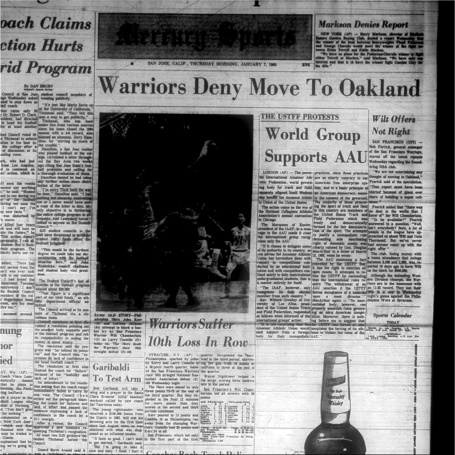 There's three troubling headlines from this snippet from the San Jose Mercury archives, circa January 7, 1965.  The first being "Warriors Deny Move To Oakland," the second being "Warriors Suffer 10th Loss In Row," and the last being "Wilt Offers Not Right."

But the most surprising of the three headlines, to me at least, is the one on the far right of how the Warriors were listening to offers for Wilt Chamberlain, even when times got rough.  We all know the story that Wilt Chamberlain was eventually traded.  This is no surprise.  But if you read the article closer, there's a few shocking tidbits:

General Manager Bob Ferrick is quoted as such:

"Is he available? Well isn't everyone? Sure, a lot of people in the league have asked us about Wilt and Nate Thurmond. But we've never had anyone come up with the right offer."

...the defending Western Division champs, the Warriors are in the basement with an 11-32 record.

My Warriors history doesn't go that far back.  So anyone who might know a thing or two about this era, please let us know how they got so bad so quick?  Were things so bad that the organization put the future Hall of Famer and top 50 player of all-time on the trading block, just like that?

But what I find most interesting about this is how Ferrick, realizing how bad the team was at that point in time, was willing to field offers for his two best players.  The Warriors of the present or last 20 or so years are known to rattle off pretty huge losing streaks, but you rarely hear them talk about putting their players on the block unless it is the extremes, like choking a coach or falling off a moped.

As history goes, the Warriors eventually traded Wilt and both parties, sort of, lived happily ever after as Wilt and the Warriors both got their rings anyway.

With that said, do you still feel that anyone on the Warriors is 'untouchable' or 'untradeable'?  Is parting with Curry even "unthinkable" (cue up Alicia Keys)?