Share All sharing options for: Calbert Cheaney, The Dancer

Calbert Cheaney, Warriors assistant and apparently the all-time leading scorer in Big Ten history, has many talents. No I'm not talking about his "towel waving talents" from his court-side seats, which Golden State of Mind nicknamed him appropriately as "towel."  But apparently, his towel waving choreography comes from his former days as a dancer.

Rusty Simmons' piece in the San Francisco Chronicle introduces the new Warriors assistant coaches that head coach Keith Smart has assembled, which it is revealed that coach Cheaney was once a dancer in a Crystal Waters video. The song apparently publicity for the "NBA at 50: Musical Celebration" cd.  Crystal Waters is known for such hits as "100% Pure Love" and "Gypsy Woman," which the latter has since been sampled for T.I.'s crossover hit "Why U Wanna."

But these facts are neither here nor there. Crystal Waters should be known for giving Calbert Cheaney a chance to show off his talents.  For those that might not remember this, here he is: 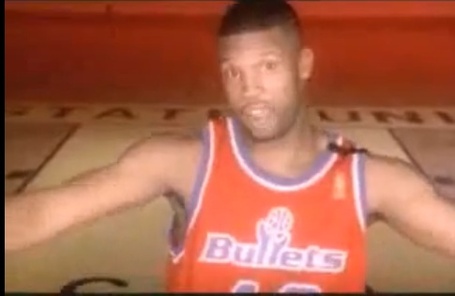 For the full effect of Cheaney's smoothness deserving of ABC's "Dancing with the Stars" peep the full video:

Crystal Waters - Say... If You Feel Alright HD (via chicocrazy)