The San Francisco Giants made the Sports Illustrated cover after winning the 2012 World Series.

The San Francisco Giants had a magical run to the 2012 World Series. For their performance they were rewarded with the Sports Illustrated cover. 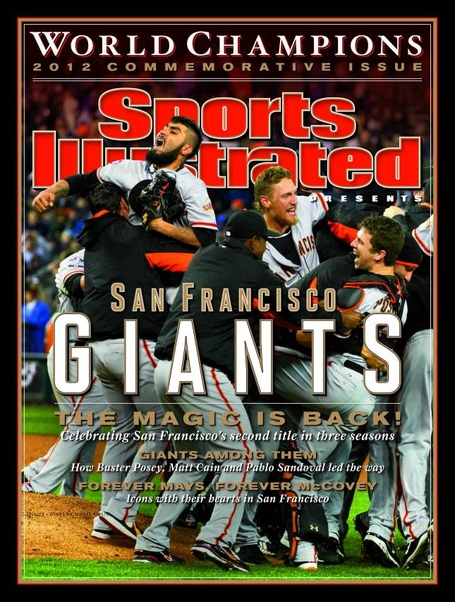 The Giants regained Buster Posey from a horrific 2011 injury, and he's now the presumptive favorite to win 2012 National League MVP honors. They lost Melky Cabrera to a PED suspension and the offense somehow got better. They fell behind the Dodgers midway through the season but recovered to blast away from their rivals in the home stretch. Then they came back against the Reds and the Cardinals before sweeping the Tigers in the World Series.

Marco Scutaro was picked up at the trade deadline and has been one of the best hitters in baseball, including hitting the Giants into the World Series as the NLCS MVP. Pablo Sandoval hit three homers in Game 1 of the World Series and won MVP honors for the series. Ryan Vogelsong completed an epic comeback story with incredible pitching during the playoffs. Barry Zito redeemed a disappointing career with San Francisco with big performances in the NLCS and the World Series. And Matt Cain, Madison Bumgarner, Tim Lincecum pitched lights out.