Andrus Peat, a consensus 5-Star recruit, has committed to the Stanford Cardinal, announcing the news on television on National Signing Day 2012. Peat, who played offensive tackle for Corona Del Sol High School in Tempe, AZ chose to play for the Cardinal over Florida State, Nebraska, and USC, the three other finalists vying for his services. 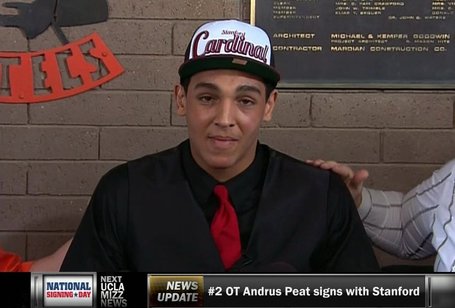 Peat demonstrates good explosion and playing strength at this stage, and has the size for the offensive tackle position at the major level of competition such as Stanford. Peat has tremendous upside and should have a long and productive career with the Cardinal.

Peat was the 6-highest offensive tackle in the Rivals rankings, and the 32 overall player in the nation. He joins a Stanford squad in need of some fresh meat on the line with Jonathan Martin and others leaving for the NFL.

Here's a look at the Cardinal recruits thus far: 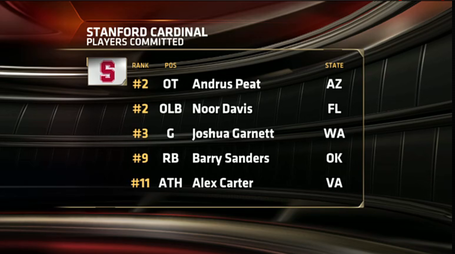 To discuss Andrus Peat and his decision to play for the Trees, head over to Rule of Tree. For wall-to-wall recruiting coverage, head to SB Nation's National Signing Day 2012 hub.