PHOTO: Cal Football Should Wear White Helmets Once This Season

Share All sharing options for: PHOTO: Cal Football Should Wear White Helmets Once This Season

At Bay Area Media Day, Cal football head coach Jeff Tedford discussed a multitude of topics, including the depth chart, the Pac-12 title game, the amount of playcalling he'll do for the Golden Bears every year, the rookies who might play on defense, and the painfully exhausting running back situation. For more news updates, head to the California Golden Blogs for a full report.

But really, we're here to talk about helmets. Isn't that all we care about?

Tedford pretty much all but confirmed that the Bears will play with white helmets once this season. To get a look at what they'd look like, check one photo of them out after the jump. 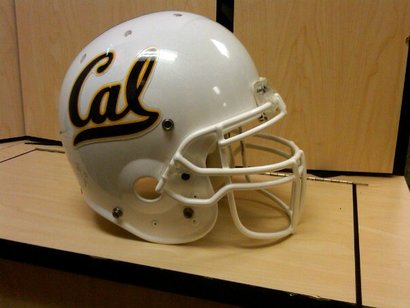 The original report from last March stated that the Bears would probably use these white helmets in one road game in 2011, which would match up well with their white unis. It might be a little disconcerting for Cal fans to see an all-white look, because it'd look a little too much like this, but for only a one-time deal it could look pretty sleek for Golden Bear athletes.