There are few teams in college football that stay true to their original colors. One of them is the stodgy USC Trojans, who have for the most part worn the same uniforms for decades. However, for some reason, they're thinking of changing it up net year and scrapping the traditionals for at least one game. While there has been speculation that Oregon jazzing up their uniforms has helped the Ducks land key recruits away from the Trojans, USC also has a brand they like to protect, and you would think they wouldn't want to mess around with one of the most distinguished wardrobes in all of sport.

So after all this bluster about staying true to the USC Cardinal and Gold, you get this, according to Scott Wolf of Inside SoCal. 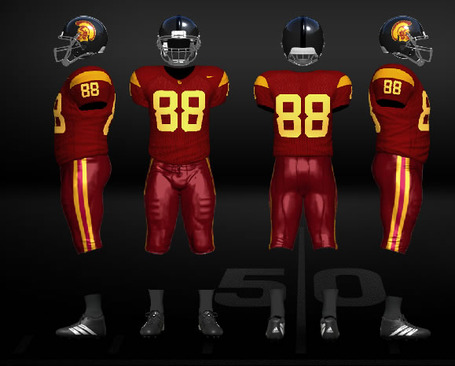 Lord. What is that? It's as if the Stanford football team had their helmets dipped in mined oil and their uniforms soaked in olive oil, and that's what USC will be playing in once next season. Good luck trying to look good in those, particularly going against some of the best uniforms in sports, the UCLA Bruins powder blues. (Yes, Lane Kiffin wants to debut these monstrosities in a rivalry game.)

What do you think of the USC alternate look? Do you have any opinion other than 'hideous'?  Let us know in the comments.

For more thoughts on these unis from Trojan fans, check out Conquest Chronicles.