Share All sharing options for: Aaron Rodgers And Jordy Nelson Grace The Cover Of Sports Illustrated

Green Bay Packers quarterback and former Cal great Aaron Rodgers isn't known for giving up on his team. He always seems to be there to pick his teammates up when they let him down, and they come right back up and perform big-time. James Jones did that against the Atlanta Falcons after making a huge drop against the Philadelphia Eagles. The Packers special teams came together and played solid football for the final two weeks after being horrible all regular season. They rallied when Rodgers needed them the most.

Perhaps no one exemplified that more than Packers receiver Jordy Nelson. Nelson hauled in nine receptions for 140 yards, but he dropped a few makeable catches. Yet Rodgers went right back to him. After Nelson couldn't haul in the deep fly pattern down the right sideline, Rodgers went right back to him on the next drive on 3rd and 1 and threw the ball right onto his chest on a deep right pattern to give Green Bay a 7-0 lead. After Nelson dropped a pass on a middle crossing route that would've given Green Bay a first down in the fourth quarter, Rodgers darted one straight into his chest on a short post route that Nelson took 38 yards down the field to set up first and goal and helped the Packers back up to a two-score lead in the 4th quarter. Rodgers never gave up on Nelson, and Nelson never gave up on himself.

Now they'll both be on the cover of Sports Illustrated on Wednesday. Who says nice guys finish last? 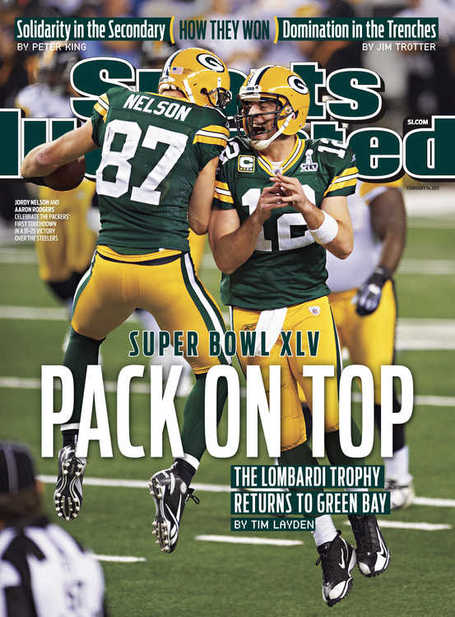