It must've been a long 24 hours for Green Bay Packers quarterback Aaron Rodgers to get back to celebrating with his teammates in Wisconsin. While the rest of his team was heading back on a flight to Green Bay, he was doing what all Super Bowl MVPs have done for two and a half decades ever since the punch-happy Phil Simms did it--going to Disney World.

Looking at it now, this has to be one of the strangest traditions in all of sport. It makes sense for a team or a group of players to head to the "happiest place on Earth," but just Rodgers? It had to be a little awkward for Rodgers to be jolted from his postgame reverie to spend about 15 to 20 minutes filming what amounts to promotions for the Mickey Mouse empire.

Rodgers seemed to take it all in stride though. 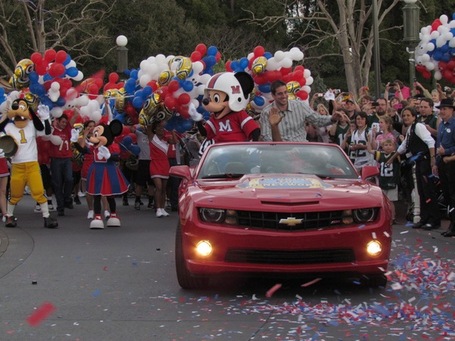 Here he is eating some cheese that's shaped in the iconic "G" of the Packer logo. It was made by Disney chefs, which I can only assume is danger zone. 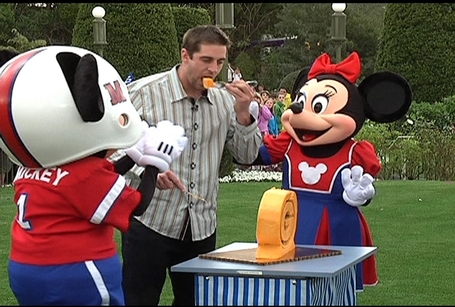 Here's video of the entire celebration. Don't expect "cut that cheese" to make it into the lexicon of great Packer cheers.

For Cal fans looking for something to cheer about, remember when Rodgers was presented a bright red Camaro for winning the Super Bowl MVP and was driven around in the same model at the Magic Kingdom? He might be changing that up after the Super Bowl.

"They said I have a choice of color. Red is not my favorite color. I'm going to go with either blur or black, I think," Rodgers told us.

Looks like Rodgers might be trading his car in for something more Cal-friendly, if you know what I mean.