There apparently have been a few claims as to who gave Aaron Rodgers his now famed championship belt for winning Super Bowl XLV and earning MVP honors. Wrestling legend Ric Flair claimed he gave Rodgers one of the belts, but so did The Score intern Mike Dubajic (a lifelong Packers fan). Rodgers's press conference quote seems to indicate that it was Dubajic, as it appeared that he had no idea who the man was. It also looks like it was a heavyweight championship belt for boxing, if Dubajic's Facebook is any indication. Sorry Ric, looks like you're out of luck here.

However, that's not the only belt Rodgers has gotten in the past 24 hours. Rodgers seemed to clear up who gave him a second championship belt. In the press conference, he credited UFC President Dana White for giving him another one of the belts, personally thanking him on Rodgers's Twitter account.

White supposed gave the belt for Liddell to hand off to Rodgers. You can see Chuck Liddell celebrating with Rodgers after the conclusion of the Super Bowl. 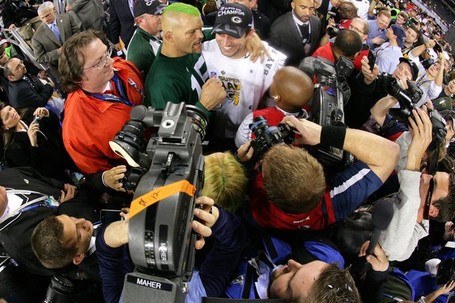 And on the Late Show with David Letterman, the talk show host presented Rodgers with yet another belt, this of the wrestling type with the spinner.