Nadin Khoury, Bully Victim, Has Got DeSean Jackson On His Side

Share All sharing options for: Nadin Khoury, Bully Victim, Has Got DeSean Jackson On His Side

For those of you who don't know who Nadin Khoury is, he was the victim of a brutal attack by a vicious group of bullies in Northern Philadelphia. If you have the stomach for it, parts of the video are available here. It is not for the faint of heart. The teenagers who attacked him have all been arrested and are facing kidnapping and/or assault charges.

Something all of us hopefully have the stomach for is how Nadin responded to the attack, and how he's looking to move forward through it. Bullying is one of those acts that few kids speak out on, for fear of even greater retaliation. But Nadin is willing to testify against the kids who bullied him, and try to inspire other kids to speak up against their own personal demons to help curb the destructive behavior that plagues many of the helpless children throughout America.

And for his resiliency to such a heinous act, he was rewarded for it. While appearing on The View to tell his story, he got a big surprise from one of Cal's finest.

Philadelphia Eagles wide receiver DeSean Jackson is Nadin's favorite athlete, and Jackson raced over to New York City to be part of the show once he found out about Nadin's story (along with teammates Todd Herremans and Jamaal Jackson). This is what unfolded.

Here they are after the View, with Nadin draped in DeSean's jersey. Pretty good fit for the kid. 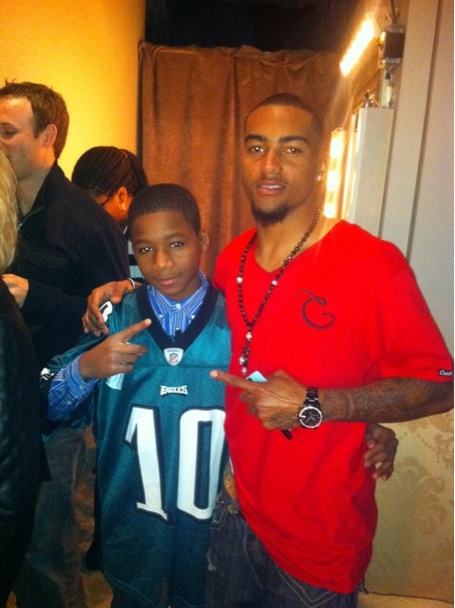