Green Bay Packers quarterback and Cal football great Aaron Rodgers has put in some good time to generate some pretty excellent touchdown celebrations. These celebrations generally don't garner the ire of NFL, because the National Football League only wants to punish the egomanical wide receiver who dares not to set a good example for the kids and never wants to punish the golden boy quarterbacks. (Note of clarification: The point is not to call Rodgers an egomaniac. The point is to call these celebration penalties STUPID.)

So let's take a look at some of Rodgers's greatest moments of revelry as an NFL quarterback. Choosing the best one might be harder than you might think though.

This is the famous one now. The one that's inspired a nation. The one that's earned Aaron so much free swag that wrestlers, boxers and fighters would die to get (and now he probably has them all beat!). This is the marquee one for sure (click on the image below for the animation).

But there are some worthy contenders. Just like his quarterbacking ability, Rodgers's celebration ability is multi-faceted.

Ever wonder why Rodgers looks so awkward after he throws one of his touchdown passes? Well, this is his default fist pump. 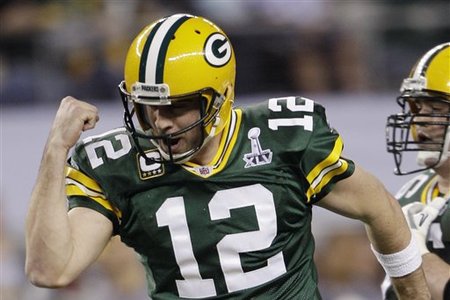 Look familiar? The nerds might get it before everyone else. 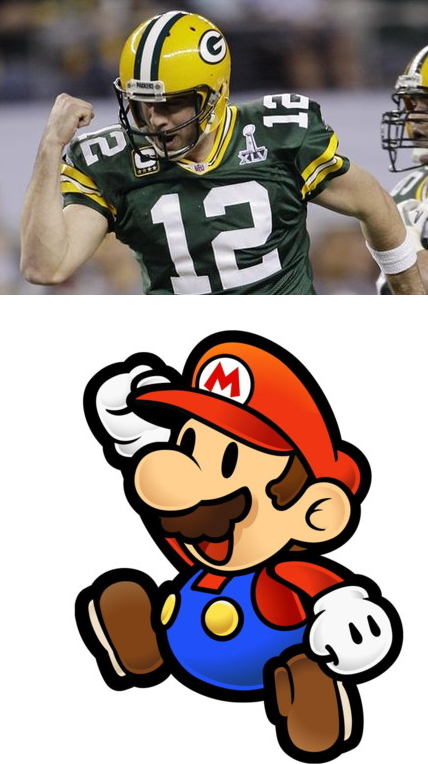 Yes, this is intentional. Yes, Rodgers has admitted to it. And it's pretty freaking sweet. This deserves just as much press as the championship belt, although I guess it'd be hard to give Princess Peach over to Rodgers (unless he's really up for another mission so soon).

This is a one-time thing, but it's still a real good one.

I'm guessing Rodgers doesn't pull this one out too often for fear of straining something. Getting injured from this complex celebration would make him look as foolhardy as one of the Grammatica brothers. Maybe if he throws a perfect game, he'll pull this one out. But kudos for degree of difficulty.

Now it's your turn, Internet. Vote for the best touchdown celebration by Rodgers!