Sloppy play, poor execution and turnovers slowed the Cal Bears in the first quarter against the USC Trojans. In all honesty, the team should feel pretty fortunate to only trail by a field goal.

The only offense of the game came on that afore mentioned field goal. After stalling near red zone, place-kicker Andre Heidari nailed a 39-yard field goal with six minutes remaining in the quarter. Trojans quarterback Matt Barkley has had trouble with the California secondary and has completed eight passes for 72 yards. USC has just two rushing yards on seven attempts.

The Bears have been able to move the ball relatively well, but two fumbles have cost the team a chance to score early. Zach Maynard is 5-for-7 with 43 passing yards thus far. Isi Sofele is off to a strong start and has accumulated 32 rushing yards on just six caries.

Oh, and USC also ran this formation in the first quarter: 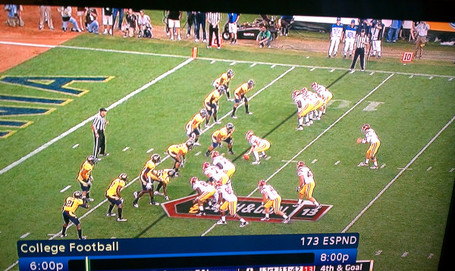 With 12 minutes remaining in the half, Cal is deep in their own territory.

For more on the Bears, check out California Golden Blogs. If you want USC coverage, Conquest Chronicles is the place to go.