Share All sharing options for: PHOTO: Cal Football Head Coach Jeff Tedford Has A New Bed In His Office

This isn't exactly the Jim Harbaugh toilet, but it's still worth taking a look-see at where the man who leads the California Golden Bears gets his rest after a long day of football practice. Rece Davis of ESPN was in Berkeley in preparation for the Cal-USC game, and tweeted this photo of Tedford's living habitat during football season. 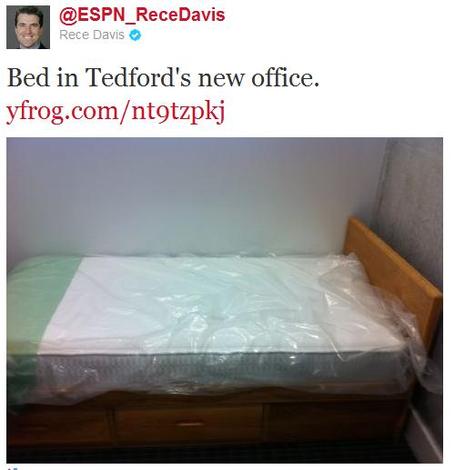 (HT Sean Keeley from SB Nation for the initial find).

Sleeping in the office is nothing new for Tedford, long known as a football workaholic. In his first year with the Golden Bears he slept most nights in his dilapidated and ancient football office. It took him nearly a decade to finally get the renovated facilities he always wanted, but it appears old habits die hard for the coach.

At least he's moved from the inflatable bed to something more solid.

For more on Tedford and Cal football, go to the California Golden Blogs.