Jahvid Best had a rushing touchdown of 50 or more yards every other game as a California Golden Bear. So it's no big surprise that Best did what he did on Monday Night Football. All it takes is one defender to miss, one defender to lose contain somewhere, and the Jet is off, scorching the sky.

That's pretty much what happened against the Chicago Bears. The Lions seal-blocked one side of the line, opened up a cutback lane for Best, and then the linebackers rushed up to try and plug things up at the line of scrimmage.

And that was it. Done. Over. Touchdown Jahvid. He tends to do that when he gets what he need.

Then he paid homage to the East Bay by repping Mac Dre. First Desmond Bishop cooking, now this. Cal Bears can get down!

Best's 88 yard run was the second-longest in Lions history, and longer than any run Barry Sanders ever did with Detroit. Best tacked on another 40+ yard run on the clinching drive for the Lions, then did this to Charles Tillman. 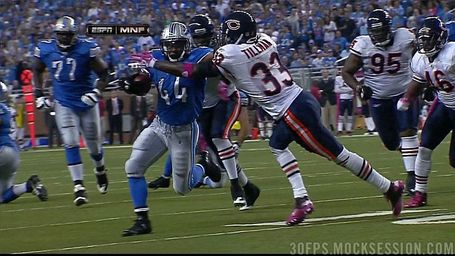 (HT to the Mothership for that)