Tiger Woods is known to be a pretty big Stanford Cardinal football supporter. He came out and was honored during the 2009 Big Game in Palo Alto for his illustrious golfing career, only to be booed by the many numerous California Golden Bears fans in attendance. The flustered Tiger eventually retreated from his speech to the crowd, and a week later his world literally crashed into a tree.

So for the sake of the rivalry, it's always great to see Tiger bring his Stanford colors up when discussing who he's rooting for in Super Bowl XLV. He's riding on the mighty Pittsburgh Steelers bandwagon. Why is that? Woods's Twitter offers all the answers, and it all revolves around one Aaron Rodgers.

And you know what? That's ok. It's about time one of the prominent Cardinal alumni athletes came out and did a little trash-talking, since their fanbase tends to be the lamest and most apathetic in all of college football. I commend him for going right out and taking a stand against Aaron Rodgers, a quarterback who tortured Stanford in his two Big Game appearances.

Unfortunately for Tiger, this means siding with the Pittsburgh Steelers, and fellow paragon of male virtue Ben Roethlisberger. He'll never go on the record and state his support for Big Ben, but the two are buddies. Hence, obvious jokes are obvious, and Rodgers being a Cal guy seems like a convenient excuse to root for his fellow bro.

Thanks to Redonkulous Bear of the California Golden Blogs, we can now get an inner view into Tiger's inner thoughts. 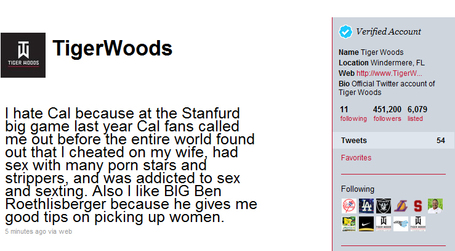