The California Golden Bears don't have a generally huge home-field advantage in terms of crowd noise. Unlike other Pac-10 venues like the Cavern of Autzen Stadium in Eugene, or the exceptionally loud Husky Stadium in Seattle, even the horrid Coliseum in LA. It makes the team's unprecedented success at home pleasantly surprising--Cal football is 35-6 at Memorial since 2004, and only in a handful of those games was the outcome in doubt in the fourth quarter.

There is one notable exception. While Memorial Stadium as a whole is very quite, the Cal student section (and as time has gone by and the Tedford sections) is generally raucous. They cheer loud on defense, they crowd-surf after touchdowns, they chant and sing and card-stunt. There's always a good time to be had in the Student Section.

And there is one custom that must be respected at all costs: DON'T WEAR RED.

As a Cal fan, our duty is to hate anything that's the color of their Cardinal rivals from across the Bay. Otherwise you will be heckled to take it off or be escorted out of the section. Doing this during the Big Game will incite a minor riot, and you'll be lucky to leave section P with any of your clothes.

During Saturday's beatdown of Arizona State, one "fan" didn't oblige, deciding to enter the Student Section with (of all things) a bright red Philadelphia Phillies hat. So he managed not only to irritate Cal fans by wearing the color of the hated Furd, but also the Giants fans who were facing their critical Game 6 later that Saturday night. He strutted the hat, the students booed him, he held it up proudly high. It looked as if douchebaggery would win the day.

A hero needed to emerge. And she arrived. 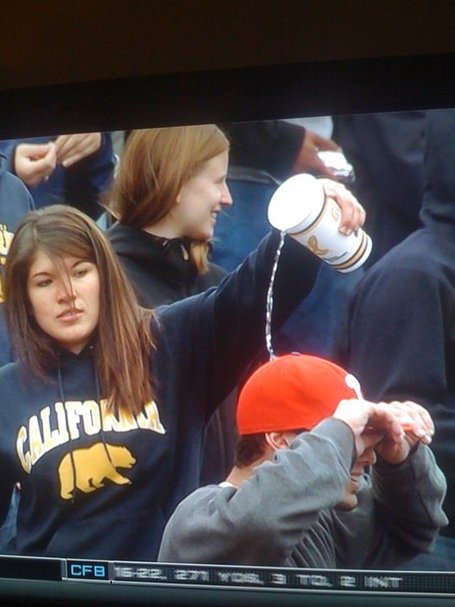 The fan was later removed. The Giants ended up winning the pennant. And all was right with the world.