It's hard to see the Tigers losing a best-of-five series until this Justin Verlander goes away.

This Justin Verlander being the cyborg from Asgard, dominating and intimidating. It's an oversimplification to suggest he's walking best-of-five victory, sure. But Verlander pitching two out of five potential games is a heckuva advantage. The Detroit Tigers struggled to get a sustained rally together, but they defeated the Oakland Athletics in Game 1 of the division series behind Verlander, winning 3-1.

I guess by definition, he's never been perfect. He was more imperfect than normal, then. Coco Crisp led the game off with a home run on a 1-2 pitch, a 95-m.p.h. fastball right down the hearth of the plate. And even after that, Verlander struggled with his command at times, walking four -- just the fifth time in 34 starts this season in which he's walked four. What's more, home-plate umpire Jim Reynolds was somewhere between the rulebook and Eric Gregg, which sounds like an especially awful Christopher Cross song. From the invaluable Brooks Baseball: 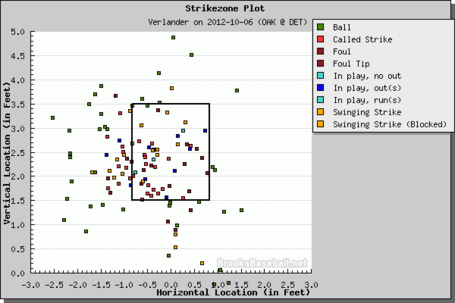 That's from the catcher's perspective, and what you're looking for are the orange squares (the strikes) and green squares (the balls) on the left side -- those would be on the outside corner to left-handed hitters. A's hitters swung at a lot of them, and Reynolds called a lot of them for both sides; if Verlander were at his best, this could have been one of those games.

Instead, it was still a magnificent performance from Verlander, and it had the classic feel -- where he started at 95, then ramped up to 97/98 by the end. He pitched a full seven innings, throwing 121 pitches and striking out 11. The Crisp homer was the only run he allowed.

His opposite number, A's starter Jarrod Parker pitched quite well, too. Parker had a brief taste of postseason experience last season with the Diamondbacks, but the taste was something like licorice floating around a warm Bud Light; he allowed two hits and a run in a third of an inning in a loss to the Brewers. He fared much better as a starter this year, going 6⅓ innings, allowing eight runners and striking out five.

Parker got into trouble early, allowing two straight deflected hits to start the game. Austin Jackson doubled off the glove of shortstop Stephen Drew, and he moved to third on a Quintin Berry single of the glove of third baseman Josh Donaldson. Miguel Cabrera grounded into a double play to tie the score at 1-1.

In the third inning, Omar Infante hit a one-out double, and he scored all the way from second when Parker couldn't field a ball up the line:

Alex Avila added a solo home run in the fifth inning to put the Tigers up 3-1, and that's where the scoring stopped. Jose Valverde spit on the Athletics' chances after that:

The Tigers take a 1-0 series lead into Sunday's Game 2, in which Tommy Milone will go for the A's against Doug Fister.

This story was originally published on Baseball Nation.