The San Francisco 49ers will be spending the next two seasons in Candlestick Park, before moving to a brand new state-of-the-art facility in Santa Clara. With the city of San Francisco unable to come to an agreement on modernizing Candlestick, the 49ers decided to depart to the South Bay and move closer to their current team headquarters.

The stadium appears to be making great progress so far. Check out an image of the construction after the jump. 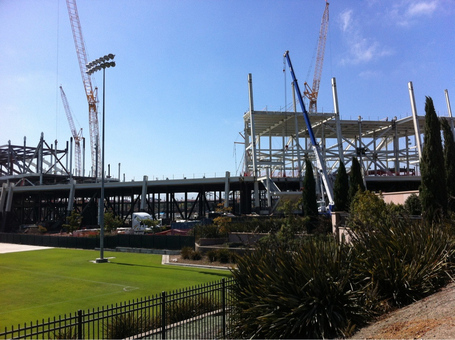 You can see the foundation is already pretty well set up. The stadium has a long way to go until completion, but it's good to see incremental progress being made since the project broke on April 19th.

The stadium will be located right next to 49ers headquarters in the South Bay. The stadium will seat at least 68,500 and be open-air, while also utilizing a green roof and solar panels. The stadium figures to be well-connected via public transportation.

Talk about the new 49ers stadium by hitting up Niners Nation.