You'd be hard-pressed to find someone who is a bigger fan of Kendall Hunter and what his potential is on the football field than I. Our San Francisco 49ers expert, Tre Faaborg, may actually be the only one, so at least we're both under one site, yeah? Prior to Sunday's game against the Detroit Lions, I wrote about why Kendall Hunter was in for a big day of work and why he could be the game-changer.

This morning, I posted some notes and observations on the game and I was not very complimentary of Hunter. He picked things up in the second half, but for the most part, the things I say generally hold true to his performance.

Kendall Hunter did not have a good game on offense or special teams. He had a fumble on a kickoff return and was dancing around behind the line of scrimmage. Twice he was supposed to take a draw up the middle, and instead took it around the outside, which was a big issue. It's nice that he wants to make a play, but sometimes the best thing to do is pick up a couple yards.

I also reference a run from Frank Gore that closed out the third quarter. It was your typical Gore run, in which he made a cut and picked up a first down without much issue. What is of particular note about that run is that Gore had an opportunity to bounce out to the right and pick up extra yardage. Instead, he cuts inside and goes down to make it a 12-yard gain and a first down. See the .gif image below.

Again, Gore has an opportunity to bounce further out and count on wide receiver Michael Crabtree, who is very good at blocking (as the beginning of the .gif illustrates), to make another block and allow him to get outside for a potential 20+ yard gain. Instead, Gore picks up a first down to extend the drive by cutting inside. He's decisive in this, because he knows that the first downs are the most important part of the game. There's no dancing while he decides.

Enter the young, prolific and somewhat indecisive Kendall Hunter. He did make up for some poor rushes with some big gains in the fourth quarter, but aside from that, he had two or three pretty poor plays in general. Below, I've highlighted one play in which Hunter was called upon for a draw, but let his indecisiveness get the best of him. It's not necessarily the worst offender, but observe.

Hunter very clearly could have kept that ball running up the gut. That was a draw play, something that Hunter can and should excel at, if only his decision-making was a little bit better. You might think that, based on what the defense was showing, he gave the play its best shot of working by bouncing outside. You'd be wrong, as Hunter was drafted especially to be able to get in between those kinds of plays.

Let's take a freeze of what Hunter saw in front of him. 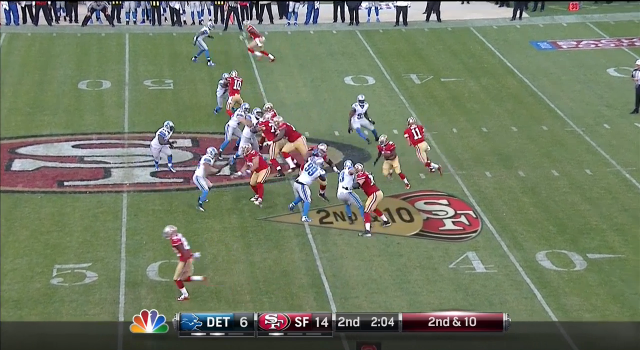 Now, the play does escalate from there and turn into a big ol' mess for Hunter, but if he made the decision to run right then and there, he could have got through to the next level and possibly even been gone, given how Detroit's tackling was on Sunday. Hunter needs to be able to make the decision before or as the ball is placed into his hands if he has any shot of helping the 49ers win.

It's only Hunter's second year in the NFL and he hasn't taken that many snaps, but given how the 49ers have planned to use him all along, this is an issue he needs to correct sooner rather than later. Watch the game again and you'll find Hunter dancing behind the line of scrimmage more than a couple times, which is a serious problem. Running backs who dance when they get the ball in their hands don't succeed in the NFL.

For more on the San Francisco 49ers, join the discussion over at Niners Nation. You can also check out everything we have to offer at SB Nation's NFL hub.