The 49ers face a predominantly pass-first offense when they host the Detroit Lions Sunday night at Candlestick Park. While everyone knows that Calvin Johnson always get's his catches, the idea is to limit those and keep him out of the end zone. The 49ers allowed some success to the tight ends in the last meeting of these teams, too.

In doing my own look at the Lions from their week one game against the Rams, I took a look at Matthew Stafford's three (yes, three) interceptions. My conclusion can be summed-up by saying that I wonder if the 49ers defensive backs are licking their chops...none of them were smart decisions by Stafford.

The first INT was thrown near the Rams' goal-line on an attempt to Tony Scheffler. Janoris Jenkins was in tight coverage with inside leverage. Sheffler appears to be working the outside, perhaps on a fade route. Stafford throws the ball way to the inside of the blanketed TE, right to Jenkins. The only explanation I have as to why he made this throw is that perhaps he expected Sheffler to run a slant or drag toward the inside of the field.

Here's a screen-shot just as Stafford released the ball. 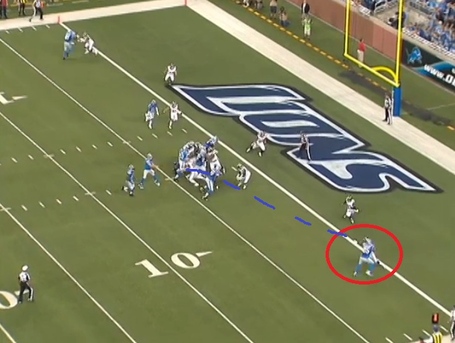 The next INT comes in the second quarter on a pass intended for Brandon Pettigrew. Jo-Lonn Dunbar (LB) drops back like he's in zone but reads Stafford's eyes and breaks before the throw. He was in great position at the time of the release and Stafford's throw was again behind the receiver. The route looks like an out, there wasn't any "come-back" to it as Pettigrew kept moving toward the sideline even after the throw. Had Stafford's pass been in front of him it might have been a completion or a batted-pass at worst.

See the screen-shot below: 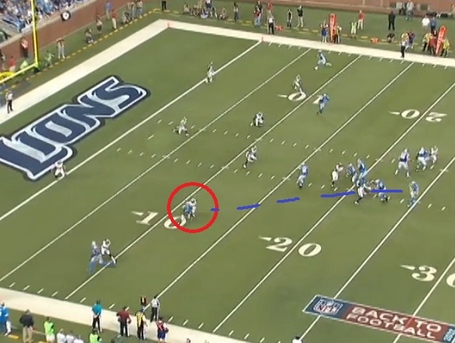 The next INT cost the Lions seven points as Cortland Finnegan takes it to the house for a touchdown. Finnegan lines up over the slot receiver and drops with him but quickly releases him and breaks to the outside receiver. Stafford throws the ball with Finnegan already entering the throwing lane on a 15 yard pass outside the numbers...plenty of time for a DB to jump the route

Reading Janoris Jenkins, the CB on the opposite side of the field, the way he passes-off his receiver coupled with the WLB simply occupying empty space leads me to believe this was Cover 2. The safeties both drop to depth in halves, too. Stafford has to recognize this and know he can't throw a deep out with a zone defender near the numbers. That throw takes too long to get there. It needs to go to the middle of the field between the CB and the safety, to the slot receiver. 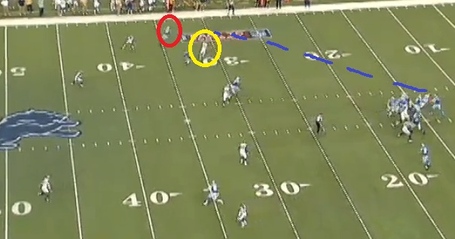 These are mis-reads by Stafford, not seeing the defenders lurking and not identifying the coverage. The 49ers can only hope he makes similar mistakes while under the pressure of their ferocious pass-rush Sunday night.

For more on the San Francisco 49ers, join the discussion over at Niners Nation. You can also check out everything we have to offer at SB Nation's NFL hub.