Share All sharing options for: Oakland A's Welcome Terry Kiser, A.K.A. Bernie Lomax To The Coliseum

In a decision that was absolutely fitting for what has been a wild, bizarre and awesome two months of Oakland A's baseball, the team invited Terry Kiser to throw out the first pitch on Saturday. Kiser is most well known for his role as Bernie Lomax in Weekend At Bernie's and Weekend At Bernie's 2.

Why was the man known as Bernie on hand? Well, as the Oakland Athletics have rolled through a dominating July and August, they have become big proponents of a dance called the "Bernie Lean". The dance comes from a song by ATM & IMD and has become a favorite of the A's clubhouse, most notably Brandon Inge, Josh Reddick and Coco Crisp.

The A's decided to turn this weekend into a "Weekend At Bernie's" tribute weekend, with the man who played Bernie in attendance. Terry Kiser attended Friday night's 20-2 stomping of the Red Sox and was back Saturday evening to throw out the first pitch. During his first pitch, Kiser was all about Bernie:

Here is a picture (courtesy of Brodie Brazil) of Kiser being helped off after the first pitch in his "Bernie" state: 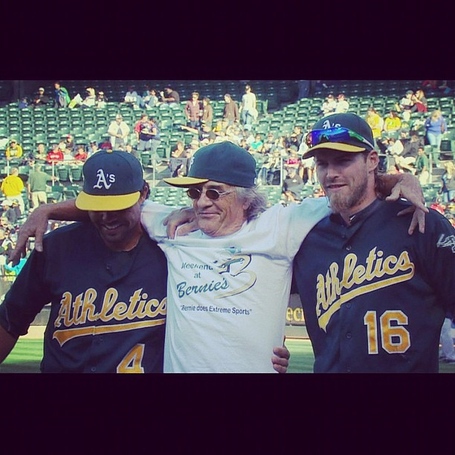